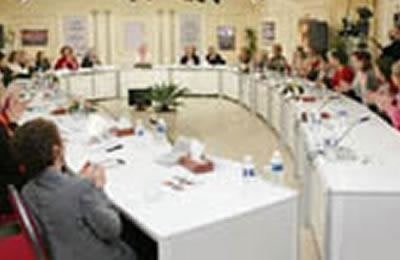 Solidarity conference with women in the Iranian Resistance and uprising

March 05, 2010 – On the occasion of March 8, International Women’s Day, a solidarity conference with women in the Iranian Resistance and uprising was held at the residence of Maryam Rajavi in Auvers-sur-Oise, northern Paris on March 5. It brought together women’s rights and equality movement activists from Italy, Spain, Greece, Algeria, Palestine, Australia, the United States, Canada, England and France.

The conference was organized by the Women’s Committee of the National Council of Resistance of Iran.

My Dear Friends and Sisters,
It is my pleasure to welcome you here.
As we commemorate March 8th, International Women’s Day, I would like to hail my sisters all over the world, especially those who have struggled and made sacrifices for the sake of advancing the causes of equality and freedom over the past year.
Let us also express endless praise for:

The courageous women of the uprisings in Iran,
The pioneering women residing in Camp Ashraf,
Those who organized thousands of protests all over the world last year,
Women who participated in a 70-day hunger strike in support of Camp Ashraf,
Heroines slain in recent months by the bullets of the regime’s Islamic Revolutionary Guard Corps, such as Neda, the symbol of Iran’s uprising,
As well as women, who as we speak, are held captive in the regime’s prisons and placed under tremendous torture and abuse.
And, last but not least, I express my warmest and most heartfelt greetings to you honorable women who have risen up to support women in Iran.
Indeed, our global commemoration, is not only in response to women’s pain and suffering, but it also relies on solidarity. It is a call which bears the promise that human progress is only made possible through the acknowledgment of equality for women.