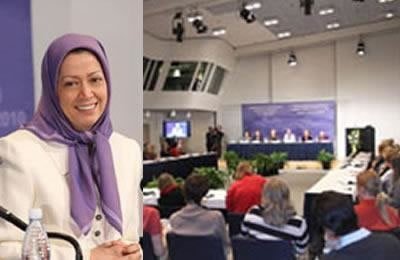 On March 11, 2010, Maryam Rajavi attended a meeting entitled “Finnish solidarity with Iranian women” at the Conference center of the Helsinki.
She addressed the situation of women and their role at the forefront of the
struggle for Freedom and Democracy against the religious fascism ruling Iran.

The meeting was chaired by Mrs. Pia Noora Kauppi with the participation of jurists, women members of the Finnish parliament, members of NGOs and women activists.
Ms. Anissa Boumedienne, Jurist, Scholar in Islamism and former first lady of Algeria, and Lady Odile Slynn also attended.

After introducing the program of the meeting, and while expressing her sincere support for the Iranian

women in the challenge they face in changing the regime in Iran, Ms. Ms Kauppi read the declaration of the parliamentary European Solidarity with Women for a free Iran.
Here are excerpts from the intervention of Maryam Rajavi:

Dear friends and sisters,
It is a pleasure to be among you today. On Monday, we celebrated International Women’s Day. I congratulate my sisters across the world on this occasion.