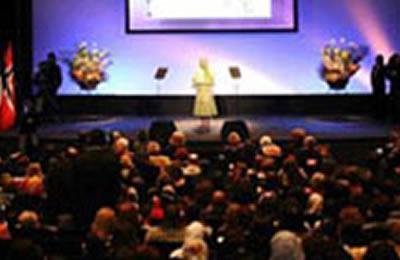 Madame Rajavi, distinguished guests, dear colleagues, ladies and gentlemen, it’s really a great privilege to be with you again today on this very important occasion.  Thank you for the gift from Ashraf and I have a feeling that we could send a message to Ashraf that if they have so many friends all over the world, they should succeed.

We have seen remarkable progress this year, especially this active role of women, what they play in Middle East in standing up to the brutal leaders that have ruled over them with an iron fist for decades.  I believe many of those women were truly inspired by the resistance of Iranian women against the fundamental regime of the mullahs in Iran where repression and humiliation of women has been part of this regime for the past 30 years.  It is therefore not a coincidence that the resistance against this regime is led and organized by women.  The Iranian women who led the uprising in Iran after the sham presidential election in 2009 encouraged many of us and set an example to women in the rest of Middle East.

Today the struggle of Iranian women is alive in Ashraf city.  One thousand brave women in Ashraf are a source of hope and motivation for millions in Iran.  This is why the mullahs focus their more pressures to destroy Ashraf.  The women in Ashraf who are members of the PMOI have a very progressive interpretation of Islam and are the antithesis of Islamic fundamentalist rulers in Iran.  A good way to judge how democratic a movement is to see their attitude towards women.  For those who want to label the Iranian resistance as undemocratic, they should have a closer look into this.  Women hold all key decision making roles in PMOI and the past seven PMOI secretary generals have been all women.  Over half of NCRI members, the umbrella organization which includes PMOI, are women.  That has a very important message to women in Iran and the young.  Without this, they would have no chance to stand up and continue to progress against the mullahs’ repression during the past 33 years.  Many of the groups in Iran did not survive for the very reason that they thought women’s rights can be ignored by struggling against this regime.  Just recent days, we remembered inside the European parliament that it’s impossible to build the democracy just for half of society, just for a male society.

In the Arab countries, everyone is now worried after the fall of dictators Islamic fanatics can grab the power and push back women the same way it happened in Iran after 1979 revolution.  So, the alternative presented today by the Iranian resistance is not just the best viable alternative to the mullahs in Iran, but also model of the progress of Islam for the rest of Middle East.  This is why we all have to be together committed, even more than before, to safeguard and protect the women of Ashraf and Liberty. They are not only a model and an inspiration for all of us, but they are a great treasure to the future of their country and for the rest of the world.

We are very concerned about the treatment of the female residents by the Iraqi forces during their transfer to the Camp Liberty and that the minimum assurances had not secured.  It was very good to listen that many of our and your friends are realizing these facts also in the United States.  It is time for Mr. Kobler to do his duty and secure these minimum assurances for the residents.  There should be no cover for Iraqi authority suppressive measures.  Mr. Kobler should inform the world about the deplorable behavior of the Iraqi government.  It is now time to protect the defenseless residents instead of implementing Iraq’s demands.

I want to say to the women in Ashraf and Liberty that I and growing group of my colleagues in the European parliament wholeheartedly support your struggle.  I strongly believe Mrs. Rajavi to become an icon for the Iranian women. During these years that I have been with your movement you have accomplished the most impossible mission.  I am truly inspired by your self-sacrifice and courageous leadership.  I want to finish with the last words of a young woman.  Moments before she died during the massacre of Ashraf in April 2011, (Saba) said, we will stand up and we will fight until the very end.  And just the last sentence, allow me.  I am sure in your fight for freedom, you should succeed.