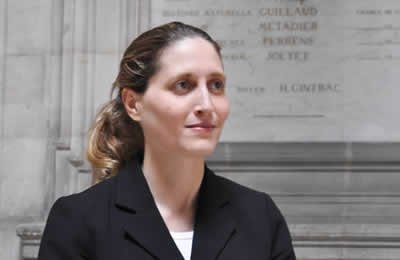 Cynthia Fleury  – Philosopher and professor at the American University in Paris

Dear Maryam, Dear Friends
We are together again for sad news. The death of seven people and wounding of dozens in the last attack on Camp Liberty.

To shout across the peril of one’s life in the world, in politics, in universities, associations that we require equality between men and women, a secular regime, the non- nuclear Iran, the abolishment of mandatory dress code, the equal share in the management of public affairs is very simple but there has never been more subversive text than this type of text here. What are the current laws in Iran that destroy women, their rights, their dignity, their lives?

Those of the mullahs! The woman is entirely dependent on man, and I quote just a few examples:

Article 1117 of the Civil Code: a husband can prevent his wife from a profession or activity that goes against the interests of the family or the honor of the husband or the wife. Article 630 of the Criminal Code: the husband can kill his wife if she has
had relations with another man, in this case the murderer is acquitted. Does the PMOI have the power to bring democracy to Iran?

We are precisely here today to accompany them to bring about democracy in Iran. All Iranian resistance movements and foreigners are welcome in this terrible fight. Never, ever the Mojahedin have claimed a monopoly of the Iranian resistance to religious fundamentalism. And nobody can deny their incessant struggle for a free, equal, pluralistic and secular Iran. Today, while we discuss the legitimacy or otherwise the assertion of the Mojahedin’s strength, there are men and women in Liberty who are attacked by terrorist groups. We celebrate Women’s Day and we’re here to tell the residents of Ashraf and to those who have been displaced to the miserable and unfair conditions of Liberty, we support their struggle and we know they pay the high price for their love of freedom.
Martin Kobler refused to go to Liberty after the attack on 9 February. I quote “because of security risk and the presence of unexploded rockets.” When it comes to his personal safety, he obviously knows this clearly. We now ask his resignation and immediate protection of residents of Liberty and, if necessary, their return to Ashraf.

Does the PMOI have the power to bring democracy to Iran? We are precisely here today to accompany them to bring aboutdemocracy in Iran.

Sarvnaz Chitsaz, Chair of the Women’s Committee of the National Council of Resistance of Iran Remarks at IWD conference on "Women Force for Change, Iran Uprising and Women's...