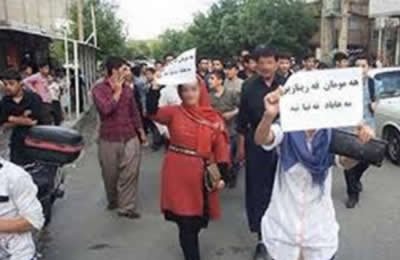 Today I want to focus on one woman who was a political prisoner in Iran for 5 years. And she spent 35 years of her life being a warrior against religious fascism in Iran.

She joined the Mojahedin when she was 17 years old. In 1981, Pouran and a friend were arrested and imprisoned for suspected resistance activities. She helped women stay strong, to resist the guards and even to escape.

One time she was in Evin prison in Tehran. She said: “It was a dirty cell with a toilet in it. In that cell cockroaches crawled in it. Leaning against the wall, my eyes caught the scratched names of the people who had signed their names there. As I read the names, I could envision the  history of the cell operating in front of me. Everybody coming here had signed their names in memorial. I was crying as I also find blood stains on the wall. But I could feel I was not alone there. Mysterious warmth has surrounded me.

I added my name to the list of others. I now had joined the rest of the travelers who had visited this place. Pouran was eventually freed from prison and went to join other members of the Resistance in Camp Ashraf, in eastern Iraq.

She was one of the thousand women who lived in Ashraf and who were then transferred to Camp Liberty. And she bore the shameful broken promises, corruption and complicity of the US and the UN in Iraq. On February 9, Camp Liberty was shelled by rockets and Pouran Najafi was one of the eight harmed people and the one woman who was murdered in the attack. What I want to say about her is that she dedicated her life to the cause of freedom and dignity. She died for the freedom of women in Iran. It is up to others who will have to finish the job.