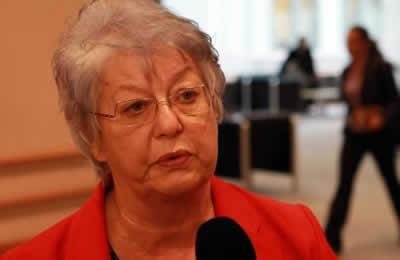 group Women for a Free Iran Dear President Rajavi, distinguished guests, dear friends. I’m really very pleased to be with you again after years and have the opportunity to participate in this very unique event organized by the Iranian resistance.

On behalf of the European Parliament solidarity group with Women for a Free Iran. It is really worrying that in Iran we have one of the worst situation for women in the world. The Iranian women have been fighting for their rights for many years. If the mullahs had the chance, they would have imposed more restrictions than we have in Afghanistan with the Taliban. We in Europe are often facing hidden discrimination but the repression of women in Iran is a part of the official policy.

There are many young girls who have turned to prostitution to earn a living. Many young women in Iran commit suicide because they are repressed and humiliated. In prisons and detention  centers women of different political views suffer frequent abuse, torture and execution.

Young girls face further dangers when in prison and there are no separate provisions for juveniles in many prisons. According to a female activist who served six months in a prison in Iran, sexual abuse and beating of girls as young as eleven to eighteen by other prisoners is common.

Another cruel way of torturing is keeping the prisoner in small cages, as it was reported, also by an Iranian woman who served time in prison. In the European Parliament there is strong support and sympathy for the movement of Mrs. Rajavi, the PMOI and the residents of Ashraf and Liberty.

Mrs. Rajavi has been in the European Parliament many times and there is a wide support coming from many politicians from all political groups who regard her movement to be wholly democratic and the most serious opposition. Therefore it is not a surprise that the mullahs are only focused on her and the PMOI. The Iranian regime is not worried about any other groups, for the force and strength of the PMOI.

We in the European Parliament have several resolutions in support of the residents of Ashraf, with a great majority. We have been particularly concerned about the thousand women members of PMOI in Iraq who have been the symbols of resistance for the million of women inside and outside Iran. Today, as we have seen not long ago, we are facing a critical and very sensitive issue and that is the situation in Camp Liberty as there is a large threat to Liberty residents.

We cannot let these heroine women down. We want them all returned to Ashraf to remain safe. We know that this is the only possible way we could rescue them from further attacks so we must make it happen until the time when they could return to their home in a free Iran. We must make it happen together.