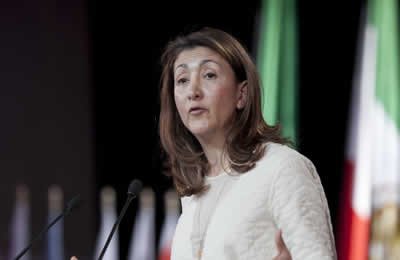 We will not accept that Maryam Rajavi will be anymore alone in the international scene. We will be with you, all the time, until we arrive to the final day of liberation of Iran.

In today’s world, one way to test the value of democracy, this is how women are treated in a political system. And today, we must denounce a tyrannical, despotic, dictatorial, but above all a misogynist regime.

They have passed laws that make us ashamed. They passed laws in which women have become things, objects of consumption, dealings, transactions. What that means a religious regime, based on the concept of God who wants to make the woman’s enemy? The God of Islam, such as the Christian God as the universal God is a God who has no gender

He is a God above genres. But if we have men who build the image of God in order to enslave women, we must understand that they have built a system that can only bring shame to God. Because, you see, what is terrible about the mullahs and their misogyny is not only that they have destroyed the concept of woman, but they simply destroy the concept of human conditions.

I’m moved because I think this young woman who is dead, killed, murdered a month ago in Camp Ashraf [Liberty] in the organized bombing, remotely controlled by the mullahs in Tehran on Camp Ashraf [Liberty] where the residents, Ashraf who the beautiful name of this heroine, but who are now imprisoned in the camp called Camp Liberty cynically. She was, as are most of the leaders of the People’s Mojahedin movement, a woman of many talents. She began by fighting the Shah of Iran, and she won. But her victory had been rounded up by the Khomeini regime.

And she was opposed to the Khomeini regime to fight for the values, principles, ideals. And she was imprisoned, and she was tortured for five years in Khomeini’s prisons. It was fortunate that thousands of other women have been able to flee and take refuge, this time in Iraq.

And then she ended up with other fighters like her, and she thought she could rebuild another life, take her dreams and fight beside her own, besides these extraordinary women who, like she had lived and survived the tyranny of Khomeini and who, like her, wanted to rebuild Iran worthy of the men and women of all Iran.

So, this voice, we have heard it today. Incredible speech of Maryam Rajavi. That, irony, unveils the profound dignity of the human being, not as Iranian woman or as Iranian man, as a human being, as a representant and the voice of this planet. A voice of this generation, of all the people in the world that are seeking the truth, are fighting for the truth and are fighting for what comes with the truth, which is freedom.

And it is so brave of Maryam Rajavi to speak from the point of view of a woman in Islam denouncing that Islam is being twisted to be used unlawfully for the sake of a group of men that have been disguising, their thirst of discrimination and power, themselves with the word of God