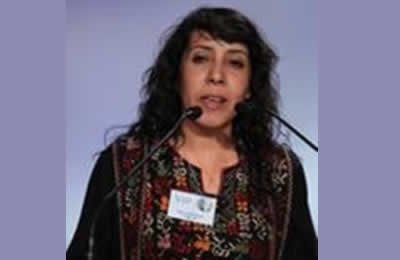 I stand here today proudly by the resistant women on Iran. This is the first resistance being led by women along with men who believe in a civilized world and women’s rights. We say no to religious fundamentalism…

While we are gathered here, women in Camp Ashraf and Liberty suffer from terrorism, violence and imprisonment and blind killing. In the face of rocket  attacks and the world’s silence these freedom loving people stand.

Beyond this we are witnessing the silence of UN and its representative, Kobler who is not a neutral person regarding the residents of Ashraf and Liberty. I would like to remind you that I personally met with Mr. Ban Ki-Moon last year and explained the issue and gave him a letter on behalf of the PMOI but Mr. Kobler does nothing but keep silent about the massacres of Maleki’s government at the behest of the ayatollahs in Tehran.

This is the opposite of what Ban Ki-Moon promised us. From this podium I believe in ourselves and the fairness of Ashraf and Liberty and call on the UNHCR to return Camp Liberty residents to Ashraf to have security and better conditions.

I  also call for a swift and urgent investigation into the recent crimes in Liberty so that the involvement of the mullahs is clarified. Also after the impartiality of Kobler is proved, I insist on the urgent need to replace Kobler with another person who stands by the principles of the UN and the International Declaration of Human Rights.

Sarvnaz Chitsaz, Chair of the Women’s Committee of the National Council of Resistance of Iran Remarks at IWD conference on "Women Force for Change, Iran Uprising and Women's...