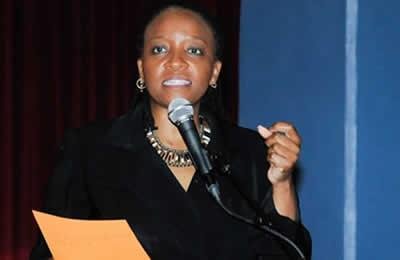 I am very honored to be here this afternoon with this amazing group of women activists from around the world. I am sorry that I missed the main event yesterday of international women’s Day and I was actually in South Africa not able to get here.

I think that the movement that we are here to support in terms of the women of Ashraf and Liberty, the women in Iran itself, it is all part of that human rights struggle for women around the world. I think that for most of us we come into situations saying that we want to give all people the benefit of the doubt in terms of their words and their actions, and in particular when we look at the movement of the people from Ashraf to Liberty while there were many questions and many concerns raised by a Madam Rajavi and the organization but also by international figures and diplomats state people about what was the aim of move to Liberty? All we have been subsequently is the mortar attack on Liberty.

We have seen the fact that there is no security in that camp. We now have the evidence and testimony of Mr. Boumedra who has said from the very beginning that there was not an honest attempt to be an honest mediator, an honest facilitator from the point of UNAMI.

The first is at the very least Mr. Kobler needs to be removed as the representative of the UN because we can no longer give him the benefit of the doubt. Over and over, his words and his actions have shown that it is not a concern for the people of Ashraf or Liberty that is directing his words and actions.

The second, I think that we can agree that the aim of moving people to liberty has not been fulfilled. We were told that people were being moved so that the UNHCR could carry out its interviews and that people could be relocated outside of Iraq.

Well today we have less than 10 people who had gone through the interview process and therefore being able to be relocated safely out of Iraq. That is an unacceptable pace of relocation for safety, and when we see how vulnerable the people are in Liberty, vulnerable to much greater extent than they were in Ashraf where we were already concerned about their safety and security.