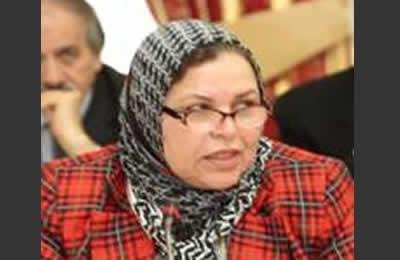 I send my salutations on behalf of all Palestinian people and the Palestinian women and hold your hand tight and support your legitimate struggle for democracy, freedom and equality. We also state our solidarity with the Iranian women, especially the women of Ashraf and Liberty and extremely condemn the attack on them and especially condemn the February 9th attack.

I join in one voice with the sisters who called on the formation of an international investigation committee to reveal the true face of the criminals to be held accountable. As Palestinian women and men, we stand by your struggle to achieve your goals for the settlement of an independent, free and democratic government; a government to bring peace and security to the people of the region.

The cause of Palestine is the cause of all the free people of the world, a cause effecting all developments in the Middle East. In this day we urge for the fight on violence against women; violence that is perpetrated daily in front of our eyes, from India, Ashraf, Liberty, Palestine, Syria, Iraq or Egypt. We call to support one another to stand up to violence against women especially for the 1000 women in Ashraf and Liberty. I say to the UN, remove Mr. Kobler.

At the end I will say that you are one brave and strong woman, a defender of not Iranian women’s rights but the rights of all women because you have gathered all the world’s female scholars to commemorate this day. I congratulate you for this victory today. I stand with you and the women’s front against religious fundamentalism to protect women in war zone areas, women against abuse and violence to achieve their rights.