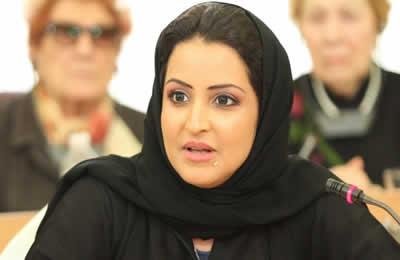 Actually I congratulate Madame Rajavi for this path of struggle that we follow with great enthusiasm. Hopefully we will be ambassadors  of Muslim women. This long struggle of Madame Maryam Rajavi and the advancement the Iranian resistance has achieved comes from a deep believe that there is no difference between men and women; all are in the equality movement.

I also want to insist that Madame Maryam Rajavi’s view on the overthrow of Iranian regime is by change by the Iranian people. I see women are in the Iranian resistance, women who have tasted the bitterness of religious rule for 30 years in Iran, including arrests, torture and execution of thousands of women.

This revolution has risen from the depth of these women who believe in this resistance that lead it for equality, justice, freedom and liberty from the mullahs oppression who have held freedom and humanity of the Iranian people captive, we are with you and I raise my voice with you in condemning the Feb. 9th attack on Liberty.

I send my deepest condolences to the Iranian resistance and people and ask God to place the martyrs in his heaven. I call for an investigation committee into this crime even though the world has kept silent about this crime. I don’t even see any action from the UN.

Particularly I call on the UN High Commissioner, a woman of known experience in the struggle, a human rights and women’s rights lawyer to stand by the women of Ashraf and Liberty and to issue a statement calling for an investigation on Martin Kobler. Just as the saying that being silent on the truth is being a mute demon, Kobler did not just act impartial and has hand in this crime. I urge on all women activists in the UN and all women working for human rights to stand by the women in Ashraf and Liberty.