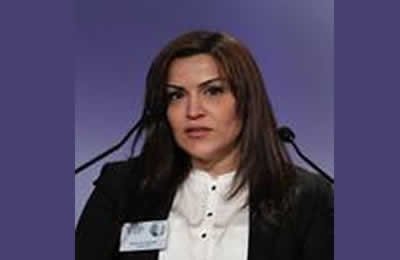 Salutations from the land of Nile and Ahram. I come from a country with a civilization of 7 thousand years, a country of Hoda Sheravi and Seize Nebravi and Samire Mousa, vanguard women of a great struggle for Egyptian women’s freedom from the chains of family sanctuary.

I know that women’s international laws and covenants are recognized in all countries, rights that are supported by human rights principles and humanitarian laws. I know all religions respect women and violence and persecution against women are condemned.

I don’t know why some insist on turning the clock hour backwards. Currently in the constitutions of Arabic spring countries, women don’t have rights to force them back from taking political actions. Then where is the higher duty? Where are representing parliaments and people’s councils?

Women are also forced to not even come to the streets and come short of their votes because their rights in many areas such as sexual violence and oppression are violated. This is while governments do nothing without passing laws to count abuse of women a crime, especially without holding perpetrators accountable. Taking care of women’s situation is like taking care of men’s situation, just as ignoring women surely will lead to ignoring men, in other words disregarding women’s rights will continue generation after generation.