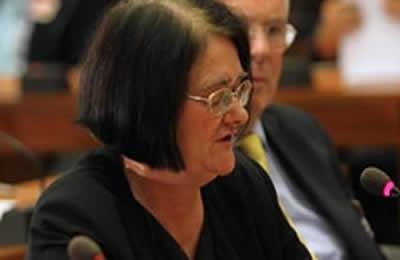 Madam Rajavi, I bring greetings from UK, greetings to all our sisters in Ashraf and Liberty, and to all our sisters here today. Thank you for inviting the law society of England and Wales to be part of this important conference to honor 1000 brave women of camp Liberty and Ashraf, heroines in the front site for freedom.

The law society represents 140 thousand lawyers and we have strong program in defense of human rights. We support the women of Iran and those in exile in particular those at risk of attack and assassination. I share with you some of actions we have made in support and solidarity with the women of Iran. In 2009, following the attack on Ashraf, the law society called upon UNAMI in accordance with its mandate set down in UN security council resolution 1830 to ensure the protection of people in Ashraf.

In May 2011, the law society denounced the attack of April by the Iraqi security forces. Our most recent public statement has been to renounce and condemn the attack on Liberty on the 9th of February. We are appalled at extreme exposure of the residents in Liberty where not only they are housed in prison like condition, but also are now unable to hide from the attack of rockets and mortars.

The attack was a blatant disregard of the rule of law. There must be an investigation on the attack on Liberty. We demand an investigation. This lack of action on the part of UN envoy demonstrates a lack of impartiality and level of irresponsibility that is  ordering on criminal.

Leading human rights lawyers consider that this may merit prosecution of Martin Kobler in the international criminal court. It is time to replace the UN envoy with a  new envoy who will ensure the protection of the refugees especially because there are warnings of new attacks.

The residents should no longer be exposed in Liberty where there is absolutely no shelter. They must be moved to a place of safety. Camp Ashraf as we know has protection. The international community must demand the refugees be moved back to  Ashraf.

Let’s assure the law society, legal representatives of lawyers in UK will continue to remain an outspoken critic of violation of human rights. We stand alongside all our sisters in  demand of gender equality and abolition of discrimination against women. We stand with you. I end by saying to day we celebrate the fortitude and strength of the brave women of Ashraf and Liberty and we stand together for a better future and universal defense of human rights