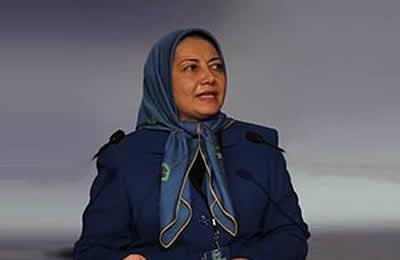 «I firmly believe in a future where women are free to lead and contribute to their societies and will be the source to ratify misogyny and it is here that we must build an international from against fundamentalism.»

As we mark international women’s day, we also celebrate all who made possible this landmark commitment of gender equality and women’s empowerment. Allow me to first congratulate all women, particularly the women of Iran and our dear sisters in camps Ashraf and Liberty, whose tireless efforts and extraordinary resistance have become the guarantee for the victory of the Iranian people over the religious fascism ruling in Iran.

I welcome all our speakers and prominent women in our panel and I thank all the guests and participants who have come from near and far to the occasion. I also thank the organisations and associations who have sponsored the event.

In our meeting this year we have guests and delegations from 30 countries in Europe, North America, Africa and Asia. Our master of ceremonies is Mrs. Linda Chavez, the President of the Centre for Equal Opportunity and she is a former official of the White House who was assisted by Mrs. Ingrid Betancourt, a presidential candidate in Colombia, is a researcher and a writer.

I’m very grateful for their participation because in many of these countries the people understand and feel the real danger of fundamentalism in their everyday lives. So solidarity for women is the only way to defeat this phenomenon.

We must also devote ourselves to supporting our brothers and sisters in Camps Liberty and Ashraf, particularly the 1000 women who have been a source of inspiration to freedom-loving Iranians around the world. They are an inspiration to intimidate the regime that not only threatens them, but that threatens the rest of the world.
I firmly believe in a future where women are free to lead and contribute to their societies and will be the source to annihilate misogyny and it is here that we must build an international front against fundamentalism. Together, let us realize that vision.

National Council of Resistance of Iran (NCRI), a broad coalition of democratic Iranian organizations, groups, and personal¬ities, was founded in 1981 in Tehran, Iran on the initiative of Massoud Rajavi, the leader of the Iranian Resistance. Maryam Rajavi is the President-elect of the NCRI for the transitional period. Her mandate is to oversee the peaceful transfer of power to the Iranian people following the regime’s overthrow. Women comprise 50 percent of the Council’s members. Visit our website at: http://www.ncr-iran.org/en/