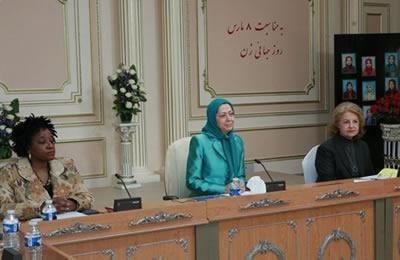 “Women: Force for Change and Against Fundamentalism”

“Women: Force for Change and Against Fundamentalism”

Dear Sisters, Distinguished Parliamentarians,
I welcome you to the headquarters of the Iranian Resistance, my dear sisters, who have come here from Egypt, Palestine, Jordan, and other countries.
On the occasion of International Women’s Day, I pay tribute to all those women who fight for freedom and equality around the world.

We have risen up to put an end to the suffering of our people, and especially the anguish of women in Iran, in the region and around the world.
We all know that to the extent that we succeed in abolishing oppression against women anywhere, humanity as a whole will be that much more liberated, too. I think realizing equality demands an enduring struggle, which must never end.

Dear sisters, you know full well that the eradication of suffering among women requires a great deal of sacrifice, particularly and before anyone else, sacrifices made by women themselves.

Therefore, the struggle for women’s rights must never fade away, both for the sake of themselves and for the sake of society as a whole. You know better than anyone else that this struggle, particularly on this day, must be complemented with specific commitments. And, I think, a commitment to lend urgent support to women anywhere who face suppression, various calamities, and numerous difficulties is critical and essential.

I would like to start with my sisters in Syria, who are facing grueling and dreadful circumstances. The scenes we witness on a daily basis are intolerable to watch for any human being. The slaughter and massacre of women and children is taking place on a vast scale. According to published figures, over the past two years, the Syrian people have sacrificed more than 90,000 martyrs, many of whom are women and children.

The killing of such a large number of children in front of cameras and the eyes of the world, at a time when the crimes are still occurring, and as the world watches on, marks a new form of crimes against humanity. Sadly, the world remains silent. We have gathered here today to once again declare that women can rise up against such crimes against humanity and can prevent the world from remaining silent in the face of these crimes.

We are also gathered here today to protest against the events unfolding in Iraq. We are witnesses to the savagery, crimes and suppression committed against women and girls in that country. This, too, is an example of crimes against humanity. Imprisoning Iraqi women for having family ties or under other irrelevant pretexts is a disaster. I think we need an international campaign to make the world hear the voices of Iraqi women. Undoubtedly, the events in Iraq will not be contained in the boundaries of that country.

This is one of the darkest times for Iraqi women because of the actions of the Nouri al-Maliki government. I heard an Iraqi father say in an interview that her daughter was arrested at a very young age, and upon her release from prison, she had already given birth to three children. It is an utter disgrace that a regime is in power, which commits such crimes with impunity, and even after they are revealed by the press, there is no global protest against the regime.

I would also like to make an appeal with respect to the one thousand heroines of the Mojahedin residing in camps Ashraf and Liberty. Everyone knows that their lives are clearly in danger. They could be targeted by rockets once again, in circumstances where they have no means of protecting or defending themselves, and while the Maliki government refuses to allow the entry of even the most rudimentary safety equipment to Liberty. Silence in the face of such crimes and such a government is not an option. This is a government that, on the orders of Khamenei, has carried out every plot imaginable against the PMOI, including forcible evacuation from Ashraf to Liberty with the collusion of Kobler, denying their basic needs, and containing them in a prison that is half a square kilometer in size. Then, in collaboration with the regime’s Qods Force, they launch missile attacks against Liberty residents. And after the slaughter of seven residents, including my dear sister Pouran Najafi and six brothers, and after the wounding of 100 residents, including a number of our beloved sisters, the Iraqi government has the audacity to publicly announce that it cannot guarantee that another attack would not take place. It is clear that more attacks will follow.

Therefore, when the international community so visibly keeps silent in the face of the crimes against the PMOI, it is actually encouraging criminals and oppressors to launch more attacks.
You all know that as far as Khamanei’s regime is concerned, in light of the upcoming sham presidential elections, and while the nuclear crisis will gain in intensity despite the policy of appeasement and in light of the regime’s insistence on obtaining a nuclear weapon, in addition to the growing and explosive discontent in Iranian society, the regime sees its only chance of overcoming this impasse in attacking and killing the only organization and the only organized opposition. This is the opposition that is the regime’s arch nemesis, the source of its crises, and the force that is leading it to being overthrown. At the same time, the regime wants to use such attacks and crimes to boost the morale of its demoralized and miserable forces.

Therefore, today, I would like to use this opportunity to invite all of you dear sisters and brothers who are here to join an international campaign aimed at preventing the repeat of another catastrophe and another cruel attack, which would certainly result in the killing of a large number of our sisters and brothers in Liberty. I invite us all to commit to forcing the international community to break its silence, and use its leverage and powers to put pressure on the Iraqi government, the United Nations and the UN Security Council to guarantee the protection and safety of the residents of Ashraf and Liberty.

There is no doubt that gender equality is a good motto. The slogans of freedom and liberation of women are great. But just about anyone can chant a slogan. Not everyone, however, is prepared to pay the requisite price for it. This is because the price is hefty; it requires dedication of time and exacts a heavy toll. But, know this: if we refuse to abandon this struggle, and if we avoid succumbing to the existing balance of power under any circumstances, we can definitely stay in the field. And, if we can manage to stay in the battlefield, we can certainly make advances and realize the goals of liberation and equality.

Our commitments towards our sisters and brothers in Liberty, and securing their protection and safety, are serious, and it is essential that we pursue and fulfill them with all our might. The UN, the United States and the Security Council must fulfill their obligations in this regard, adopt serious decisions and guarantee their implementation. And, with respect to the Secretary General’s Special Representative in Iraq, I have to stress that, regrettably, he is not an impartial party and must be replaced. An investigative committee must be formed to investigate the recent attacks and identify those who were involved. And, finally, in order to guarantee the protection and safety of residents in Liberty, they must either be immediately and collectively transferred to the U.S. or a European country, albeit on a temporary basis so that they can later be resettled; otherwise, in the current circumstances, the only practical option would be to return them to Ashraf.

It is high time for women to expand and expand even more, at an international level, the broad front against fundamentalism and religious dictatorship, and in defence of the liberation of the people of the region from the clutches of fundamentalists.
This is especially the case now that all the evidence, facts and intelligence indicate that the people of Africa, too, are faced with the threat of fundamentalism, terrorism, and the meddling of the mullahs. Therefore, before the regime can expand its influence, we must extend the reach of our front against fundamentalism.

I am confident that with the participation of women dedicated to the cause of equality and resistance against brutality, suppression and dictatorship, that is, each and every one of you and all those who represent you, we can force the enemy to retreat and ultimately sweep it away from Iran and the entire region.

This is our commitment; and it is within our power and our capabilities: We can and we must.