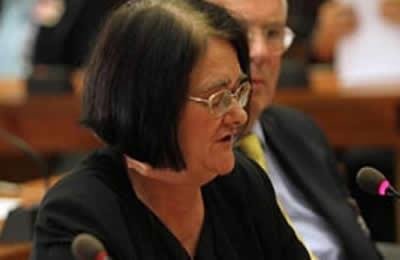 I recently returned from Paris where I spoke on behalf of the Law Society at the International Women’s Day conference in support of Iranian women in exile. There are 1,000 Iranian women held in two camps in Iraq, where they have been refugees for 25 years.

They are the residents of camps Ashraf and Liberty, living in a situation that few know much about.
The alarming rate of human rights violations in Iran has brought women activists into the frontline. In the first two months of 2013 alone, Tehran has had the highest number of executions per capita in the world and women are prime targets. The Paris conference was attended by women parliamentarians and representatives from over 30 countries, with speakers giving their extensive and united support for Iranian women under threat of persecution and attack.

Today, as we look around the Middle East and North Africa at revolutions and uprisings, women are participants in all the protests to overthrow dictatorships. Women activists are looking for freedom and equality. However, many of those in command of new governments have no respect for women’s equality.

Camp Ashraf was attacked twice by Iraqi troops at the behest of the Iranian regime, killing 47 and injuring over 1,000 in 2009 and 2011. The Law Society protested about these attacks and called for UN envoy Martin Kobler to ensure full protection for the Ashraf residents. On 9 February, Camp Liberty was attacked by 40 rockets. Seven defenceless residents of the camp, including a woman, were killed and more than 100 injured. On 13 March an eighth refugee died from his wounds.

Residents of Camp Ashraf were forced to leave their 25-year-old home for a temporary transit location in Camp Liberty in Iraq from December 2011 onwards, following a broken promise by the UN and US that they would be relocated in the short term to third countries. Not only has the relocation been delayed in the last year, but the number of people killed in the last attack is more than those relocated by the UN Refugee Agency (UNHCR) alone.

Two days after the rocket attack on Camp Liberty, the human rights committee of the Society released a statement calling on the Iraqi government to ensure protection for the refugees and to investigate the killings of Liberty residents. We support statements issued by UNHCR, UK parliamentarians and Amnesty International condemning the attacks, and call for Iraqi government protection for the refugees by moving them to a safe area such as Camp Ashraf, where there is some protective shelter from aerial attack. Such attacks must be investigated and the perpetrators brought to justice. Public threats to mount another attack on Camp Liberty residents have been made, and the international legal community is gravely concerned for the refugees’ safety.

Following the unanimous appeal by participants in Paris to support an immediate return to Ashraf, the UN and the US should start by opening the doors there immediately so that the Iranian regime thinks twice before attacking again.

Romanian MP: Women are true pioneers of the fight for gender equality in Iran