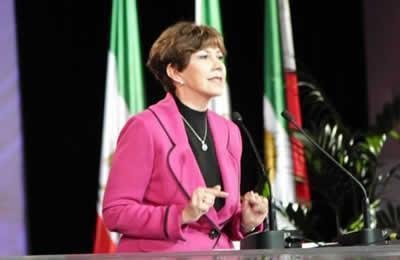 Linda Chavez, moderator of the conference: Hello. My name is Linda Chavez. I served in the White House on the senior staff under President Ronald Reagan. It is a great honor and pleasure to be with you today.

This is the second year that I have been at this gathering in Paris and I have to tell you that watching the news last week as the world media was searching for some sign of democracy inIran, they were searching in the wrong place, because that sign is here in this hall. You are the future of the country ofIran and no man who was handpicked to put on a ballot by the Mullahs who control every aspect of life inIran can truly be said to represent that country.

We have in this room the future of the country ofIran, of freedom and democracy. And we have gathered today here dignitaries from all over the world. Now why I have been chosen as the person who has the most difficult job in the room, I don’t know. I thought I was your friend, but maybe not because you have chosen me to be the timekeeper and to try to keep people on schedule for their speeches and it is going to be my duty today to remind those dignitaries who have come that every voice wants to be heard today.

And so I will ask each of you to stick to the limit that has been assigned because there are so many speakers here who want to share their support for the Iranian people and their support for President Elect, Madame Rajavi.

I also want to mention that this is not just being seen in this room. There are tens of thousands of you already in this room, but there are millions others who are watching and who are listening. And I want to remind especially the young people in this room who have Twitter accounts to use the hashtag #IranFreedom and Twitter your hearts away. Tweet to the entire world that the future of Iran can be seen among the democratic people in this room…

Thank you very much. We are coming close to the end. We are not quite there yet. We still have a few speakers to hear from. But I want to take this moment just to talk about what has happened here in this hall, because I think we must not lose sight of the fact that the world was focused last week on elections in Iran. They were sham elections. They elected no one. They were not part of a free and democratic expression.

But the world was watching. What they should be watching is what is going on in this hall because you had seen today tens of thousands of Iranians who want to see freedom and democracy in their countries, and they have been joined with people from every part of the globe. Freedom loving people who want to see a peaceful, free and pluralistic country of Iran that will be governed not by mullahs in black robes who dictate every aspect of life, but by the people themselves in their freely elected officials.

Today’s gathering is the most decisive and loudest response to those elections. It says that the religious dictatorship ruling Iran does not in fact represent the Iranian people, and if you want to look at who does represent the Iranian people look to those like Madame Rajavi who in fact represents the aspirations of her people for freedom, for democracy, for freedom for women as well as men. And I want to send that message not just to those in this room but throughout the world. Remember, get on your social media, go on Facebook, go on Twitter, get this message out.

They must know that we are concerned about the criminal rocket attacks on those people that killed two and injured dozens of others. This cannot stand. We cannot allow this kind of bloodshed to continue. We must fight it. We must make our leaders understand this.

We must have the most minimum security, and the only thing that will happen that will allow those who are in Iraq and in those concentration camps to be able to protect themselves is to remove them from Liberty, send them back to Ashraf where they have a city that they built with their own hands and where they can protect themselves. Only when we are able to do this and when we demand that the world community provide for security and the minimum humanitarian provisions for the people that are still in Iraq will we get our message across.

We must make that message known, not just here, we must write letters, we must talk to our news media. We must talk to our elected leaders. We must organize to get that message out. And then our job will not be done because our job will not be done until there is a free Iran. But at least we will have made progress towards that.

Linda Chavez is an American author, commentator, and radio talk show host. She is also a Fox News analyst, Chairman of the Center for Equal Opportunity, has a syndicated column that appears in newspapers nationwide each week, and sits on the Board of Directors of two Fortune 1000 companies: Pilgrims Pride and ABM Industries Inc. Chavez was the highest-ranking woman in President Ronald Reagan’s White House, and was the first Latina ever nominated to the United States Cabinet, when President George W. Bush nominated her Secretary of Labor.