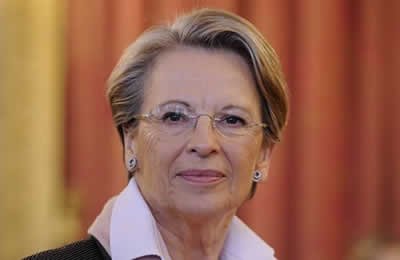 Terrorism has no destiny. War has no destiny as long as there are men and women like you who are ready to sacrifice themselves for honor and values of freedom and dignity of men and women. Yes, it is you who can give courage to those who are under tyranny, those who are under violence and are victims of terror. They count on you, on every one of you and not on political authorities.

Thus, the international community needs all countries and global powers to help provide stability for the world and to help keep peace.
Your country Iran should play a major role because of its history, culture and richness. It should be acknowledged that today this is not done because Iran is in the hand political authorities who are isolating and weakening the country.

It is true that continuing the nuclear program which is a threat to the region and the world has led to sanctions that weaken the regime and primarily punish Iranian men and women. It is true that Iran’s desire to continue its nuclear program without any international legitimacy prevents playing this role. The other thing that prevents playing this role is the view on gender relationships, a fundamentalist approach towards religion which prevents the values of democracy to be recognized.

Therefore, Mrs. Maryam Rajavi, we, you, and the world needs a democratic Iran; an Iran that respects freedom of expression; an Iran that does not accept the residents of Liberty regularly being bombarded, attacked and killed. This is not acceptable in our world. In a world where we believe in freedom and human rights it is not acceptable. We want an Iran that respects the principles that you announced earlier which are the foundations of a great and democratic country that can play its genuine role in the world.

Together for our children and men and women of the world we want peace, democracy and a policy that would increase the potentials of everyone. Therefore, be assured that we the political personalities have come here to say we will always stand on the side of those who struggle for freedom and tolerance and a better future for men and women of Iran and the world.