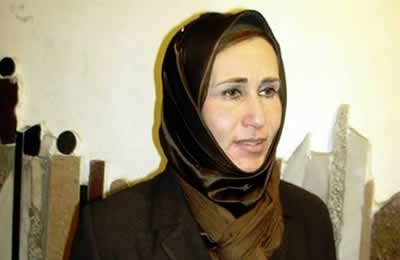 Nejat Abu Bakr from Palestine:  In the Name of the Great Merciful God,

In the Name of the Beneficent God,

Almighty Allah says in the Quran: We want to do favor for those who are weak on the earth and we look upon them as leaders and inheritors. (Sura Gheses, verse 5).
Mrs. Maryam Rajavi, last year I addressed you as the First Lady of the East. But today I call you the first lady of free and bold speech who can change words in action. On this day I congratulate you, I congratulate all those who are struggling in Liberty and Ashraf and all the suppressed in the world, those who sacrifice their blood and freedom to open the eyes of those whose brains are closed to freedom and justice.

Today on behalf of the Arab delegations and Palestinians and all those who have fled and been coldly homelessness, we come here to congratulate you for the removal of terrorist labels upon you, because today you are the righteous owners. I also come here to say that we are also equal in many ways, because Palestinians also acquired oversight membership at the UN with a vote of 132 countries. In this essence, human and equal participation is victorious and it is in motion to reach all the suppressed and oppressed in the world.

That is why during these days and especially in the Arab countries from the East to the West we must be evoked by few issue and important points. The first issue that all Muslims and Arabs and all the free including Muslims, Christians, Jews must realize is that credit for justice is not attainable and justice in parts cannot be according to the tendency of one or another.

Justice must include all the suppressed and those denied of freedom, land and rights. And we Palestinians call to all the free in the world to stand by us because we have chosen the path of peace and our president and leader, Abu Mazen has chosen this path, the person who will take away all the difficult conditions. He has carried the flag of change and victory and carried all the flags of victory for freedom, justice and peace on his shoulder.

he distanced all those who want to hand missiles and airplanes for the issue of Palestine. Therefore he believes that justice and peace will be acquired by talks and not by the language of blood. This language will go towards victory, but the language of blood is nothing and it will only add more pain, suffering and destruction. Therefore we ask all the free in the world to understand that we need to buy time for the Palestinians, not time for time, because there are many destructionists.

For those who want a new policy for Palestine and Arabs, we say colonial Islam and ideology demanders will not be victorious in Palestine, Arab and Islamic countries. Demanders of political Islam and their backers must remember well we do not want a new Middle East with incomplete peace. We call for a Middle East based on justice, democracy, equality and love for all those who want to live in peace.

I will end my speech with the same salutes and regard to you, salutes from Palestine, the land of unity. On behalf of the free, the prisoners, martyrs and wounded we send our salutes as Palestinians inside and outside to all the freedom lovers in Liberty and all the freedom lovers in the Arab nation and world. We call on the world to support your just cause. Salute to you all; victorious ones. To God, From God and Towards God.

Mrs. Nejat Abu Bakr is a member of the Palestinian Parliament and a strong advocate of human rights and women’s rights in Palestine.