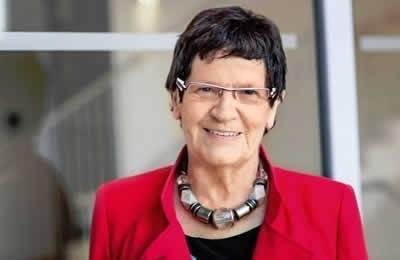 Rita Sussmuth:  Very short, because I heard that there’s 20 more speakers addressing to you.  I suppose you are tired now.  But however, it’s a big honor to be with you.

And let me express, when I speak in the name of our German group, which is very active, not only Parliamentarians but lots of people in civil society committed to the concerns of the Iranian people and especially to help people at Ashraf and CampLiberty.

So that’s an important message.  We are here as a group bringing you also the support of 70 parliamentarians in a book what was given to Madame Rajavi.  And my concern is a special one this evening.  We need resistance.  And it’s hard to make resistance when there’s not enough acceptance and not enough willingness really to change the regime.  So, thank all of you because you need this cohesion, this belonging to.  Not only people from theIran but also from all over the world.

Thank you very much for your support and we hope, as we are entreating from month to month, that we will give enough support for our common concerns, for our common goals.

And the second concern is the situation at CampLiberty is very, very dangerous.  It’s not enough to have good words, to have good intentions, we need action.  We need rules that really change their situation in terms of security, in terms of getting out of that country, having acceptance in all our safe countries, and there’s not enough acceptance, neither in the big United States, nor in Europe.

So what is important in the next week, not only months, weeks, we have to show their activities in terms of more security.  They have nothing to be safe and more secure.  And that has to be done at Liberty because it’s no reason to bring people from Ashraf to CampLiberty where they are more uncertain than ever before.

And so far I call on all our countries as we go forward to push and to press our ministers to open the doors for these heroes, as we call them.  But as they really regarded and felt as heroes, and in so far don’t leave these encouraging day without doing more.

And so we have to show that really people in danger, people who are risking their lives, who have …  that they can hope there are no further killed in the next weeks because we know there will be further attacks.  So, let’s stay together, let’s hope together, let’s act together.  And all the best for people in Ashraf and Liberty and for the Iranian people.  Thank you.