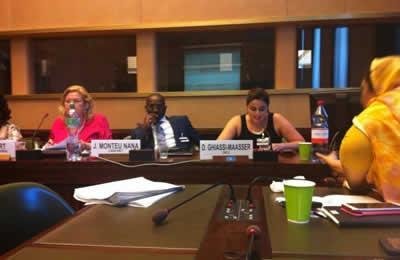 Today we have all come together in order to speak about the progress in the effective implementation on Economic, Social and Cultural Rights of Women according to the UN-Millennium Development Goals 2015 towards the Sustainable Development Goals. In my following report I will especially talk about Women’s Entrepreneurship in Iran as a challenge influenced by political, legal, economical and social barriers.

May I briefly introduce myself – my name is Dorna and I am a 23-years-old law-student from Berlin now studying International Law at the University of Geneva. At present I am completing an internship at the Geneva International Centre for Justice.

But today I am also speaking to you as the daughter of Iranian dissidents who were obliged to leave their homeland Iran because of their political activities against the Iranian Government. My father was imprisoned in his capacity as the Vice-minister of Environment in Azerbaijan – a province in northwestern Iran – for many years due to supporting the PMOI in their struggle and political ideals: DEMOCRACY, FREEDOM and the RESPECT FOR FUNDAMENTAL HUMAN RIGHTS for all Iranians regardless of their gender, ethnicity, religion or ideology…

Women’s discrimination also affects women’s entrepreneurship which actually should be seen as a great potential and contribution to the social and economical development of a country. Instead of encouraging women to benefit from their talents and capabilities to become successful entrepreneurs, the Iranian government systematically suppresses women and violates many International Laws including Conventions.

In my following report I will focus on the violation of the Convention on the Elimination of All Forms of Discrimination Against Women (CEDAW) by the Iranian Government.The Adoption of misogynous family laws such as Article 1117 of the Iranian Civil Code which demands the requirement of husband’s consent for the employment of his wife is in clear violation of Article 11 of CEDAW which ensures the right to free choice of profession and employment.

According to the Global Gender Gap Report 2013 published by the World Economic Forum, which ranked Iran at 130 out of 136 countries, this country has the lowest female representation in the labour forces and the lowest estimated female income in the region. This is in clear violation of Art. 11 (b) of CEDAW which ensures the right to the same employment opportunities, including the application of the same criteria for selection in matters of employment. Furthermore the Iranian Government clearly violates Art. 11 (d) of CEDAW which demands the right to equal remuneration.

Since the majority of graduates from universities are women, Iran could benefit from a well educated pool of women. But in fact Iran’s women are subject to the most highest social barriers and restrictions which means a fatal loss of human capital.

However this is in clear violation of  Art. 10 (a) of CEDAW which encourages the same conditions for career as well as for the access to studies as well as Art. 10 (b) which demands the access to the same curricula. Furthermore the Iranian government continues to ignore Art. 10 (c) which ensures the elimination of any stereotyped concept of the roles of men and women at all levels and in all forms of education which Mullahs’ Supreme Leader Ali Khamenei once again demonstrated in his recent speech about gender equality by stating as follows:

“If we want our vantage point on the issue of women to be sound, logical, accurate and unshackling then we must distance ourselves from the Western mindset in issues such as employment and gender equality. The gender equality of women and men is an utterly wrong notion made by the West, which is outdated and treacherous.”

Last year, on the anniversary of International Women’s Day, the United Nations emphasized its commitment to women’s rights by pointing out the following motto:

“A promise is a promise: time for action to end violence against women“

Governments from Europe and the United States should realize that there is no chance to accomplish real changes within the current political system of the Islamic Republic of Iran.

A clear sign against the violation of women’s rights is needed. Appeasement policy which is primarily indicated through deep economic relations with the Iranian Government is not an adequate answer to serious human rights violation including the systematic suppression of women in Iran.

Instead of supporting or at least tolerating the Iranian Government, the European Union and the United States could contribute to a real change by supporting the National Council of Resistance of Iran – a broad coalition of democratic Iranian organizations, groups, and personalities whose aim is to establish a secular democratic republic in Iran, based on the separation of religion and state.

Maryam Rajavi – the President-elect of the National Council of Resistance of Iran – is the living proof that Islam and gender equality, including women taking leadership roles, do not necessarily rule out one another. Her unique contribution to the encouragement of women to hold leading positions in the Iranian resistance has strongly influenced the National Council of Resistance of Iran on its way to become a pioneer regarding the women’s rights movement in the Middle East.

One thousand female Iranian dissidents are now living in so called Camp Liberty which is located in Bagdad/Iraq. They belong to the People’s Mojahedin Organization of Iran – an Iranian opposition group which is part of the National Council of Resistance of Iran. One third of them are ex-political prisoners who have been imprisoned for many years and have suffered serious forms of physical and mental torture. Even after several military and missile attacks on defenseless residents in Camp Ashraf and Camp Liberty, which has led to the murder of over 130 including the abduction of seven hostages, six of which are women, they did not break and have continued their struggle for a democratic change together with the people in Iran. These women are a source of hope, inspiration and motivation for thousands of women in Iran and also for the rest of the world.