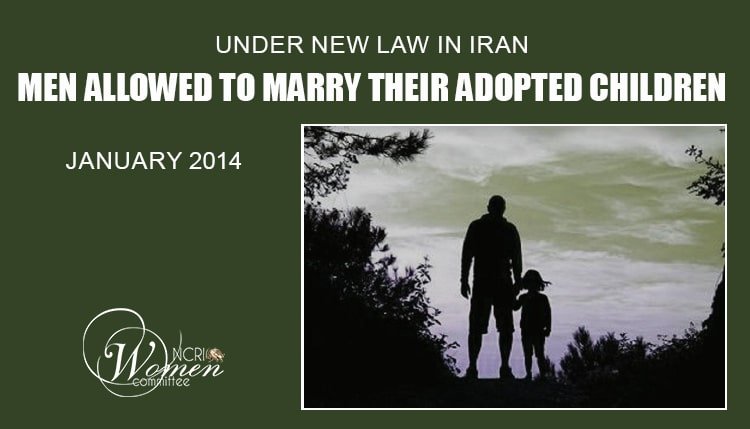 A bill called the Law to Support Abandoned Children and Teenagers was passed by the Iranian regime’s Parliament on September 22, 2013.

Like all laws passed by the Iranian regime, this law also emphasizes that the Legal Jurisprudent (Khamenei) has complete power. According to article 1 of this law, “Adopting children and teenagers who do not have guardians in order to provide their material and moral needs, will take place with the permission of the Supreme Leader and according to the law”.

Article 26 of this law stresses, “When the guardian decides to marry, he has to submit the physical characteristics of the person to court. If the marriage is carried out, the organization is tasked with announcing the marriage to the court so that by implementing the conditions of this law, they can decide on whether the mutual guardianship should continue or be terminated”.

Addendum: “Marriage, either during guardianship or after between the child and guardian is forbidden unless the court, after advisory opinion from the organization, determines that it is in the interest of the child”.

The initial Bill to support children without guardians was taken to parliament on March 7, 2009. Article 24 of this bill stipulates that, “the marriage of guardians with children or whoever is under their care depends on the permission given by the Family Court after expert opinion”. This bill was not ratified.

As a result, a bill by the name of Law to Support Disadvantaged, Defenseless and Abandoned Children was passed which in itself paves the way for child slavery and violence. It has to be noted that the term “during guardianship” can even legitimize the marriage girls who are under nine years of age. This is while even according to the medieval laws of this regime, the minimum age of marriage for girls is 13. In addition to sexual and mental violence which can crush a child’s character, this law can also result in physical injuries that might lead to the death of the child.

The first and second articles of this law also underline that any kind of measure or act that can lead to physical or spiritual problems for the child or teenager is forbidden and subject to punishment.

Iran is signatory to the International covenant on Civil and Political Rights. Article 23 of this covenant stipulates, “No marriage shall be entered into without the free and full consent of the intending spouses”. This is while the Iranian regime has completely neglected the innocent child and without any reference to the principle party says that “When the guardian decides to marry, he has to submit the physical characteristics of the girl to court”.

According to article 19 of the Convention on the Rights of the Child to which Iran became a signatory in 1993, “States Parties shall take all appropriate legislative, administrative, social and educational measures to protect the child from all forms of physical or mental violence, injury or abuse, neglect or negligent treatment, maltreatment or exploitation, including sexual abuse”.

There is no need to mention that the so-called law to protect children ratified by the Iranian regime is a complete violation of all its duties as stipulated in international covenants.

Clerics who are considered to be the religious authorities in this government not only allow the violation of children’s rights, but also stress that the guardianship of abandoned girls is unreligious without marriage.

“Clerics recognize illicit relationships as appropriate only if the correct paths have been taken and sheer guardianship does not legitimize (the relationship between the male guardian and the female child)”, Mohammed-Reza Darani, a cleric, said.

“The Supreme leader has stressed that the foster child is not like a (son or daughter) and the relationship between the foster child and the man or woman who raises the child will not become legitimate without breastfeeding by adherence to its conditions or marriage after growth (of the child). Before puberty, temporary engagement is permitted with the consent of the judge and observing the interests of the child”.

Cleric Makarem Shirazi emphasized that an adopted child is not intimate to the parents that have adopted him\her and said: “If the child is a girl, the correct approach is to temporarily engage her to the step grandfather with the approval of the religious cleric so that she becomes a kin and could be legitimate to the guardian father.” In this case the neighbors must also give their opinion. Unfortunately, the general view of the society towards these issues is unprofessional and just emotional.

Cleric Ali Ashkouri: “Based on the main and primary rules of supremacy, there is no prohibition between the marriages of the guardian with the child because the adopted child is not a blood relative thus, this would not be considered an incestuous marriage, prohibiting it.”

Cleric Javad Tabrizi: “In case the father of the guardian passes away, a temporary engagement between the girl and the father is suggested so they can have a legitimate relationship. If the girl is under the age of puberty, permission must be given by the father or grandfather.”

Khomeini: “In regards to the marriage of an adopted child, her age must be considered. If she has not reached the age of puberty and her father or grandfather is unknown, then she cannot be wed to anyone and this will not establish a kin relationship.

In case an adapted child doesn’t have her real father and grandfather, then the religious leader is responsible for all her issues including marriage.”

Cleric Bayat Zanjani: “The adopted child, whether it’s a girl or a boy, does not have the kin bond with the guardians. However, the guardian parents could have a parental feeling but this cannot legitimize dealing with legal issues of the child.” (Saham news – Oct. 9, 2013)

Salar Moradi, member of the Social Commission in the Iranian regime’s Majlis (parliament): “An adopted child is not like a real child. Therefore, the laws and religion allows the guardian to marry the adopted child.”… “When a girl enters a home, once she reaches the age of puberty, she will no longer be considered a close relative to the men of that house, unless they engage or legally marry.”…

Eftekhari, spokesperson of Women’s fraction in Majlis: “The marriage of a guardian with his adopted child (girl) is not against the law and religion… Maybe it was better not to have this law, but now that it has been approved, it can undergo its procedures.”

Member of the social commission in Majlis, Mohammad Ismail Saeidi: “Currently there are approximately 22thousand abandoned children that the Welfare Organization must determine and they are trying to solve this problem soon. One solution was to completely omit this article but the Welfare Organization disagreed because there were three cases that the guardian father had married his adapted daughter; therefore, there should be a law for these cases.” (Khabar online news agency – March 25, 2014)

Director General of the youth and children’s office in the Welfare Organization, Hamidreza Alvand: “20 years ago, when I was in charge of the family affairs office in this organization, there was a case that a guardian father had married his adopted daughter. However, we were not able to take any actions because it was religiously legal.”

Unfortunately, the horrendous trend of incest is carried out under the so-called banner of religion and is giving legitimacy under the mullahs’ rule in Iran. Innocent girls have become victims of the Iranian regime’s medieval laws and the growth of violence against girls has been legalized. The marriage of step fathers with their step daughters never existed before the regime took over power in Iran which is all now systematic under the mullahs’ rule.

Iran: 318 acid attacks this year and no arrests!