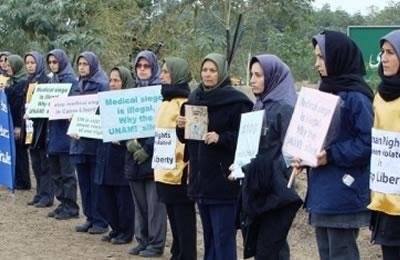 On Wednesday, December 10, dozens of Iranian women, members of opposition to the Islamic fundamentalist regime of Iran, in Camp Liberty marked Human Rights Day and held placards calling for human rights to be respected in the camp.

This letter to Prince Zeid reads in part:
“After receiving the Camp Ashraf security dossier from US forces, the Iraqi government under Maliki’s watch staged six bloody attacks and massacres in Ashraf and Liberty, and imposed an inhumane medical and logistical siege. During these assaults 116 residents lost their lives and over 1,375 others were injured. Seven residents were abducted, including six women, and 22 have suffered to death under an ongoing inhumane medical siege. We have time and again called on the UNHRC and other international organizations to conduct independent probes into these crimes and massacres. But unfortunately to this day no serious measure has taken place, and our murderers are still busy with their repressive measures against us.”