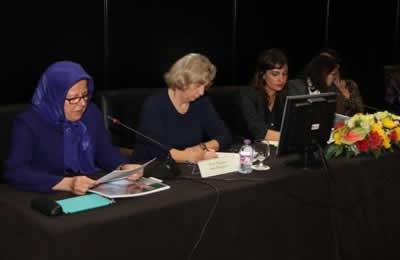 In an international conference held in the Lisbon, Portugal, jurists from European and Latin American countries reviewed the advances made in the struggle to abolish sexual violence against women.

A delegation of the NCRI Women’s Committee participated in the conference to present a report on the status of women in Iran under the misogynist regime.

In a message sent by Mrs. Maryam Rajavi, President-elect of the Iranian Resistance to the conference, she stressed, “The crackdown against women is one of the pillars of the religious dictatorship ruling Iran. In the past three decades, the mullahs ruling Iran have reigned with lashing, torture, rape, execution, stoning, degradation of women, passing laws turning women into slaves and recently attacking women with acid. The Iranian regime resorts to all sorts of crimes against brave women who rise to struggle against this regime. Those thousands of women who have been imprisoned and tortured, and the martyrs who have, throughout over the last 30 years, risen to fight against the mullahs’ regime. And we are also witnessing the pressure and vicious attacks against the 1,000 women, members of the PMOI in Ashraf and Liberty, carried out under the orders of the mullahs. Supporting these courageous women is equivalent to supporting the vanguard resistance against the religious dictatorship ruling Iran, which is the main source of fundamentalism and terrorism.”

Ms. Elaheh Arjmandi, head of the NCRI Women’s Committee delegation said in a speech, “The constitution,  the laws and policies of the mullahs’ regime are based on discrimination and misogynist viewpoints, including: the law of permitting the marriage of small girls, gender separation in universities, banning girls from education and many other restrictions. Our movement is seeking a democracy that has been clearly described in Mrs. Maryam Rajavi’s 10-point plan. It is a democracy based on freedom, equality and the separation of church and state.”

A large number of participants signed the NCRI Women’s Committee statement in support of the struggle of Iranian women for freedom and equality to also provide security for the vanguard women of the Iranian Resistance in Camp Liberty.