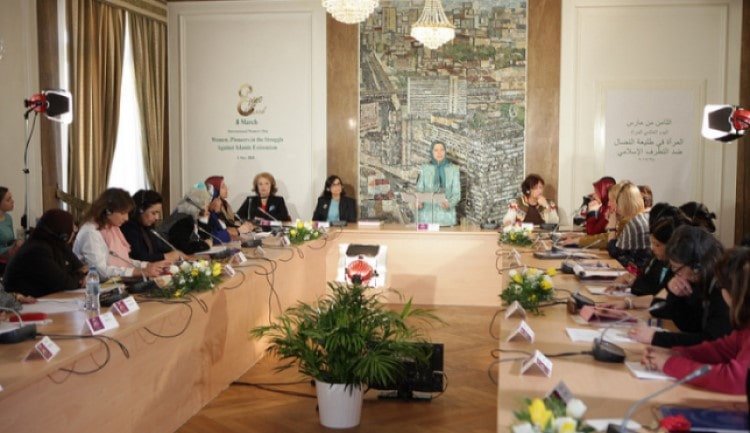 Maryam Rajavi :Saving the region from the evil of Islamic fundamentalism is women’s mission

NCRI – On Sunday, March 8, in a conference on the occasion of the International Women’s Day, Mrs. Maryam Rajavi, President-elect of the Iranian Resistance, said: The present historic confrontation, especially the great challenges in the past year against the lives and destiny of Muslim and Arab women,

particularly in Syria and Iraq, have created a situation where the responsibility of women has gone far beyond the struggle for their own freedom and equality.

Today, the great responsibility of saving the nations of the Middle East from the evil of fundamentalism rests on the shoulders of women.

In her speech in this conference, Rajavi called the Iranian regime the godfather and the epicenter of fundamentalism in the world with misogyny as its main attribute. She said: During the entire era of the rule of the mullahs, Iranian women have been targeted by the most vicious oppression, rogue humiliation, and discrimination. These include the torture and execution of tens of thousands of Mojahedin and combative women, the breach of women’s civil liberties and individual and social rights, the violation of international conventions, especially the Convention on the Elimination of All Forms of Discrimination Against Women, the humiliation, arrest and flogging to impose compulsory hejab on women, the restrictions on education and occupation, etc.

Mullahs would like to convey that the objective of this misogyny it to safeguard societal chastity or family foundations, but misogyny is at the core of the suppression of the whole society with preservation of the ruling theocracy predicated on it. Misogyny under the cloak of religion has become systematic and persistent because it is a lever to preserve the monopolistic dominion of the velayat-e faqih.

It justifies the permanent surveillance operations on people in the streets and it is the job of dozens of street patrols and institutions tasked to suppression. Similarly, clamping down on women on the pretext of mal-veiling is one of the regime’s most effective means in suppressing the society and silencing any voice of dissent.

President-elect of the Iranian Resistance noted the barbarity of the clerical regime in splashing acid on the face of defenseless Iranian women: Enchaining women on so-called religious grounds has left mullahs with no scruples in their actions, including in educational, administrative and production settings, in hiring or firing of the employees, in the constant controlling of women and youth commute in the streets, in arbitrary raids on people’s homes, in censoring of books, movies, plays and music, in filtering of websites and social media, in fabricating judicial cases, and in raiding parties.

Rajavi added: The ruling mullahs are fully aware that if they show any leniency in compulsory veiling or modify any of their laws and policies that oppress women, the latter’s power will quickly advance and mobilize the whole society. As Hassan Rouhani the Mullah’s President has acknowledged: “Hejab is necessary for security.”

Rajavi further elucidated on reasons of misogyny of the fundamentalists’ rule in Iran: Women’s imperative demand in principal is to change the status quo; namely to bring down the system of velayat-e faqih. Thus, the mullahs’ regime views the force for freedom and equality as its primary social threat and consequently, the religious fascism ruling Iran is the unequivocal record holder in the execution of women political activists in world’s contemporary history.

Nonetheless, mullahs have miserably failed in imposing their reactionary order on the Iranian woman. Face-to-face with this regime, vanguard women have assumed a key role in perseverance and in advancement of the resistance movement. The role of women in the resistance movement, particularly in Ashraf and Liberty, has been decisive in the confrontation of Iranian women against this misogynous and anti-human regime.

Secretariat of the National Council of Resistance of Iran