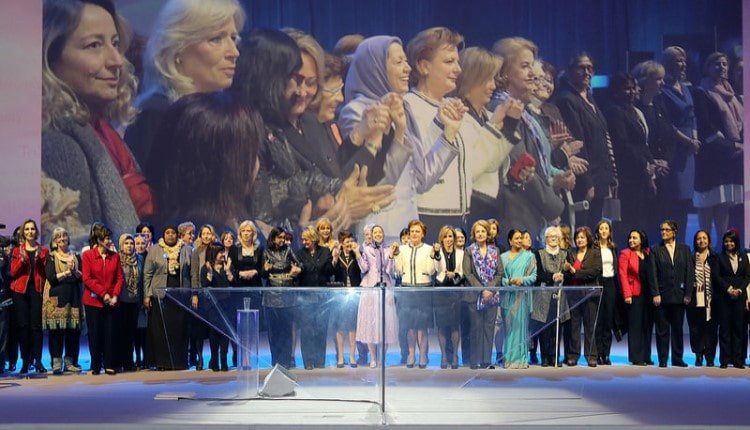 Berlin – Grand gathering on occasion of International Women’s Day with participation of over a hundred women personalities from five continents:

Call by Maryam Rajavi for buttressing movement against fundamentalism, the principal enemy of equality and global peace and security

NCRI – On Saturday, March 7, the participants in a grand gathering in Berlin on the occasion of International Women’s Day titled “For Tolerance and Equality against Fundamentalism and Misogyny” underscored that the advancement of the ideal of equality in the world today has come face-to-face with a formidable barrier, the Islamic Fundamentalism. This phenomenon is endangering the entire Middle East and the world through genocide, terrorism and discrimination and more than anything is hostile to women.

The participants stipulated that the sole solution to this crisis is to draw on women’s power and on a resistance movement that believes in women’s power and their leadership. They also called for a comprehensive strategy that focuses on the Iranian regime as the epicenter of Islamic fundamentalism, supports democratic Muslims, and prevents the Iranian regime from acquiring the nuclear weapon.

This gathering, in the presence of Mrs. Maryam Rajavi, President-elect of the Iranian Resistance, was held with the participation of a great number of prominent political, social and artistic personalities and human and women’s rights activists from the world’s five continents, including Kim Campbell, Rita Süssmuth, Linda Chavez, Frances Townsend, Ingrid Betancourt, as well as a delegation of women jurists, including Maria Candida Almeida (Portuguese General Prosecutor), delegation from Syrian opposition, delegation of prominent women from Asia, a large delegation of legislators and mayors and other German dignitaries, delegation of women parliamentarians from Arabic countries, delegations representing dozens of Iranian women associations and institutions throughout Europe and the United States, and thousands of women from various countries and followers of various religions.

In this conference Mrs. Maryam Rajavi stated that the key decisive factor in the empowering of the fundamentalists was the rise to power of reactionary mullahs in Iran that for the first time offered a model for governance by fundamentalist groups. She added: “Fundamentalism is not a face-off between Islam and the West nor a confrontation between Islam and Christianity and Judaism, or a Shia and Sunni conflict. The crux of the conflict is between freedom versus subjugation and dictatorship, between equality on the one hand and tyranny and misogyny on the other. Fundamentalism has placed misogyny at its core and through suppressing women it intimidates and suppresses the entire society.

This regime is at the heart of the problem and its support for the Assad and Maliki dictatorships in Syria and Iraq has led to the rise of fundamentalist militias and the ISIS. As such, silence in face of regime’s meddling in countries of this region, let alone collaborating with it on the pretense of fighting ISIS, is a horrendous strategic mistake.

She warned: It is delusional to ask the arsonist to put out the fire. Diagonally opposite, the correct policy is to evict the mullahs’ regime from Iraq and Syria. Bringing down this regime is an essential imperative not just for the Iranian people, but for the region and the world. The crime of the appeasement by Western governments is that they have chosen the path of conciliation with the state sponsor of fundamentalism, the regime of Iran, and have participated in clamping down on the alternative to fundamentalism. Offering concessions to this regime in the nuclear negotiations is against the highest interests of the peoples of Iran and the region and undermines global peace and security. It is also taking the human rights of the Iranian people to the altar.

She noted the escalating trend of executions in Iran, including the hanging of at least 21 prisoners on March 4, six of whom Sunni political prisoners, and stated: To avert popular uprisings, particularly during nuclear negotiations, the Iranian regime badly needs this wave of executions and oppression. Silence and inaction regarding the grave violation of human rights in Iran, not only emboldens this regime to carry on with its atrocities, but encourages the regime in pursuing the nuclear program and exporting of terrorism.

Maryam Rajavi called support for the Iranian Resistance, the democratic alternative that has been established against the clerical regime in over three decades, as an essential step in confronting fundamentalism. This alternative emphasizes on separation of the religion and the state, gender equality, and a non-nuclear Iran. And at its core is the PMOI that espouses the genuine and democratic Islam.

In her finishing statements, President-elect of the Iranian Resistance said: The largest movement of women vanguards in Camp Liberty gives hope and inspiration to Iranian women and is an asset to equality movements in the world. She called on the international community, the U.S. government, the European Union, and the United Nations to secure their protection and security.

Secretariat of the National Council of Resistance of Iran
March 7, 2015

In this great event a large number of prominent political and social figures and artists, as well as human and women rights activists, participated from world’s five continents plus representative delegations of dozens of Iranian women associations and organizations from throughout Europe and the United States participated. Speakers to this program which was inaugurated by Ms. Sarvnaz Chitsaz, NCRI Women’s Committee Chair, and was moderated by Ms. Linda Chavez, former White House Director of Public Liaison, were:

Additionally, in this program, a group of women personalities declared their solidarity with the International Front against Fundamentalism that had been announced by Mrs. Maryam Rajavi. Vida Nik Talean, President of Women Association for Democracy in Iran, spoke on behalf of Iranian women institutions and associations throughout the world that had participated in this program.

Moreover, a delegation of women on behalf of five world continents and delegations from Poland, Czechoslovakia and Slovakia participated in this program.