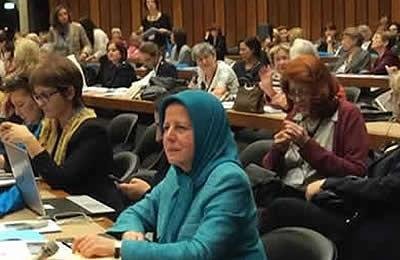 Elham Zanjani and Elahe Arj : “The fanatical actions of ISIS have been happening in Iran for decades”

The world looks at Iran these days when, after months of negotiations, the world’s big powers and the ayatollah’s regime reached a framework agreement to allow, with limitations, Tehran to go on with its nuclear program.

The pact seems to put off a menace for the Middle East and the world -the possibility of a new nuclear power in the world- but hides other realities far from the centrifuges and the enriched uranium: the executions, the tortures and the imprisonment of thousands of dissidents, opponents to the Iranian government.

Elham Zanjani and Elahe Arj put in the table all that seems to be hidden in these days of gentle diplomacy. They are both members of the National Council of Resistance of Iran (NCRI), created in 1981 and composed today of 500 members, opponents to the Hassan Rouhani government and leaded by Maryam Rajavi. They have come to Spain to take part in the 1st International Congress “The voice of rural women in the world” celebrated in Ciudad Real, and to denounce a situation “going on from 1979, when the revolution happened in Iran and the hopes for change became fear to the fundamentalism of a new supreme leader that we could not recognize” said Zanjani.

The first number they expose is as clear as overwhelming: since Rouhani -defined as a moderate, but still a clergy under the rule of the supreme leader, Ali Khamenei- came to power in August 2013, there have been 1,189 executions, 393 of them announced officially and 796 -the rest- known thanks to the work of her organisation. Between the murdered, there are 19 juveniles, 40 women and 27 political prisoners. 70 of these deaths were in public, hung in a tree, a lamp, a bridge. The number is a record in Iran, according to the members of the opposition.

Arj and Zanjani support their words with the pages of their documents, those who tell the stories of the “fallen for freedom” as they call them: the march of 500,000 against the religious power in 1981, where there were 200 hundred children between the hundreds of deaths; the 30,000 political prisoners executed by the Ayatollah Khomeini in 1988, whose families never knew they were executed, and whose bodies are still in unknown locations; the fatwa ordering all opponents to be condemned and executed, and furthermore, making the repentant kill a dissident to show his contrition; the fatwa that called to rape the girls detained virgins because, if they died virgins, the doors of the paradise could be open for them; the covers of the magazines showing pictures of prisoners who refused to identify themselves “and families could claim their corpses later”.

Cases that have names, remind us this reality with firmness and cause more pain than anger. Like Tahereh’s, leader in the university, hung from a tree by her legs, upside down, wounded by knife and who bled to death in the slope of the main entrance road to Tehran as a lesson for subversives. The case of Akbar, beheaded on a public square because of some pamphlets. The case of Zahra Kazemi, photographer, who took pictures of prisoners. Or that of the Michealian’s priests, Mehr and Dibaj, Christians also subdued by the ayatollahs as other religious minorities.

“We have documented 64 different kinds of tortures. All the fanatical acts committed now by ISIS, and that have outraged the international community so much, have been happening in Iran for decades. It is the same: extremism”, denounces Elahe Arj, exiled in France after being a prosecuted student spokesperson in her university years.

Elham Zanjani is herself a witness of the repression. She was born in Montreal in 1978, never been in her country but chose to be “part of the Iranian people”. In 1998, at 21, she went to the refugee camp Ashraf in Iraq, close to the Iranian border, home to the resistance since 1986. The residents there should have been, under the 4th Geneva Convention, political refugees. They should have been protected by the Baghdad government, as it was promised and requested by the United States. But none of that happened. The camp was attacked 26 times by orders of the then Prime Minister Nouri al-Maliki, destroying what it was in reality: a city with its campus, museums and markets.

From the first attack, in 2009, there have been 117 killed. Zanjani was injured by a grenade that exploded between her legs when trying to assist the injured. She suffered several damages in her thighs and hands. It took her months to walk again. Her pink coat hides the forearms lacking of muscle and where we can see burns and scars. She was saved because a colleague put her on a stretcher. As her friend was helping her she was hit by a gunshot.

On her memory she has the faces of Asieh -the young woman that recorded everything and put it on Youtube- or Saba -to whom Iraqi doctors refused a blood transfusion-. “Her father offered to donate, but it was not allowed unless he stopped being in the opposition. The closeness of al-Maliki with Iran is clear. When she (Saba) found out about it, she refused for her father to resign. She died a couple of hours later” denounces Zanjani.

Ashraf disappeared and the survivors were relocated to a new site, Camp Liberty. “You will be there some weeks, in 40m2”, were told. They are still there, in half of the promised space, in very precarious prefabricated houses. “It is like the Stone Age” tell the activists. There is barely some water and electricity and people die without the permit to go out the camp to treat their illnesses. There have been 27 deaths in 3 years for that reason. In the old Camp Ashraf, where 100 residents stayed to protect what they had created on those years, another attack in 2013 left 52 deaths. Washington, before leaving Iraq, had promised full protection to those residents.

The members of the CNRI -organisation who was cataloged by the international community as “terrorists” because of the “economic pressures” of Iran and its oil, and today is acclaimed as the true opposition to Tehran- argue that their country “is ready” for a revolution that topples the ayatollahs out of power, that goes further than the 2009 Iranian spring. The citizens don’t want -they say- money or weapons, “only that the world breaks its economic ties with the country and make them [the clergy] impossible to continue with their regime”.

“It is a state where people are executed, where a stepfather can marry his stepdaughter. We are not with the government. The signs of happiness after the nuclear agreement are from a minority, there is no reason to celebrate” says Zanjani. So you don’t support the framework agreement of the P5+1 with Tehran? “We were the first to warn the world about the dangers of a nuclear Iran. It is not a government that will have these technologies, it is a group of fanatics, we must remember it. We are not Pakistan nor North Korea, the power in Iran is in the hands of fundamentalists, that is why it is a threat to the world”.

THE SITUATION OF WOMEN

“I will make the situation of the minorities -like women- better” promised Rouhani when he took office. But nothing has changed since 2013, claim the activists. Women in Iran are still trapped by the prevailing Islamism, they don’t have the option of divorcing or keeping their child’s custody, the testimony of a woman is worth half of a man’s and they have forbidden access to more than 70 study fields. A 98% of women who hold a university degree don’t have a job because no one would give them one -the woman stays at home-. Those who work must demand a permission from their husbands to travel, for example, to a conference. It goes well beyond the use of the chador.

The dissidents have edited special publications about women where they include the list of the main punishments that they get nowadays in Iran: the arbitrary arrests, the prosecutions because of their dressing, the restrictions in politics and sport, the ideological persecution or the veto to their educational development.

“But we must not give up. The change will come through women. We are instruments of justice and peace. And one day soon we will see that in Iran” say confidently Elham Zanjani and Elahe Arj.