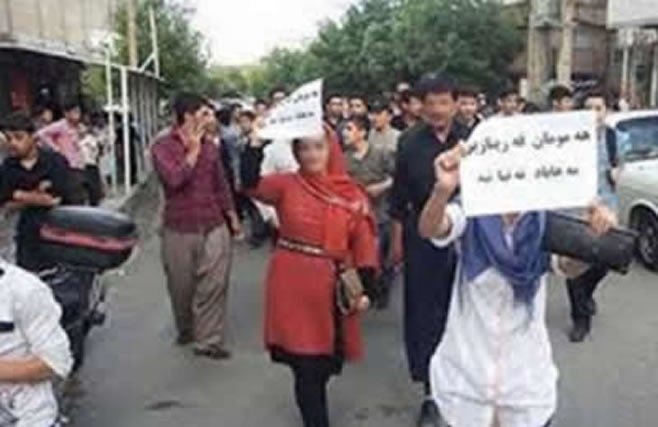 Demonstrations in Mahabad in response to death of Farinaz Khosravani

Demonstrations in the city of Mahabad took place in response to the death of a young girl, named Farinaz Khosravani, who killed herself to escape the rape attempt by an agent of the Iranian regime’s Intelligence Ministry.

The people of Mahabad took to the streets on May 7, 2015 and since then, there have been clashes with the suppressive State Security Forces (SSF). People have set Tara Hotel, the hotel where Farinaz Khosravani tried to save herself from rape, on fire.

The Secretariat of the National Council of Resistance announced, ‘Uprising of the brave people of Mahabad (A Kurdish province in Iran) took place in protest to the death of Farinaz Khosravani, a 26 year old girl who was an employee at the Tara Hotel. Farinaz intended to stand against this aggression; she had no option but to throw herself from the fourth floor of the Hotel and was killed instantly.’

In reaction to this criminal act, people of Mahabad demonstrated against the mullah’s regime and confronted SSF forces and set the hotel on fire. The people demanded a trial against the elements of Farinaz Khosravani’s death. In the anti-government demonstration, the youth in Mahabad chanted, “My sister Farinaz, I will take your revenge.”
Widespread demonstrations were continued and conflict between people and anti-riot forces in Mahabad remained steadfast until midnight of 7 May. SSF opened fire on people. Some reports claim a number of killings and some injured among demonstrators. Those injured were taken to hospital in Mahabad. Anti-riot guards and repressive forces of the mullah’s regime threw tear gas and opened fire on people. The enraged youths attacked the intelligence office. Anti-regime slogans were shouted while setting fire to Khomeini and Khamenei’s pictures.

According to the statement of NCRI, during the conflicts between youths and police forces in Mahabad, some cars belonging to the state were set on fire. At least 50 people have been reported injured and 30 have been arrested. According to some reports, 2 people were killed. Due to widespread demonstrations and protests, the regime’s agents dispatched their repressive anti-riot forces and intelligence agents from the cities of Orumiyeh and Miandoab to Mahabad and established an unannounced state of siege. The situation in some Kurdish cities are reported as unstable. Farinaz Khosravani, a 26 year old Computer Sciences graduate, was supporting her family by working at Hotel Tara.

Statement of political prisoners of Mahabad prison:
Political prisoners of Mahabad prison condemn the crime of mullah’s intelligence agents that led to the disastrous death of Farinaz Khosravani. The statement reads in part, “In the name of free women, we will never give in to the aggressors, this is the reaction of any Kurdish girl from Mahabad vis-a-vis the systematic assaults and any psychological pressures and possessions of women in this society. Farinaz Khosravani, by committing suicide, declared that women must demolish their ties and gain their strength by freeing themselves from tyranny and possessions. We, political prisoners of Mahabad prison, condemn the act of aggressors to a girl in Mahabad.”
The women’s society of Marivan said, “Farinaz Khosravani’s suicide is a clear sign of violations and inequalities against women in Iran.”

New York Times: Uprising In the city of Mahabad-Kurdistan
New York Times stated, ‘According to news and reports of witnesses and published views on social networks, angry crowds of Kurds in Mahabad, for the death of Farinaz Khosravani stood tall and set fire on the Hotel where she worked. Police used tear gases to scatter people. Farinaz khosravani threw herself from the fourth floor of this hotel on Monday.’

Latest reports from demonstrations in Mahabad:
Reports state that the municipality of Mahabad was filled with protesters. Many posts in the social media have been entitled “I am Farinaz”.
SSF have arrested Nader Mouloudi, the manager and the owner of Tara hotel. The reason for their transfer is said to protect them from the protesters. One witness says, “This move has created an idea that the manager is affiliated to the SSF.” There is also some news of people clashing with the SSF near Oshnaviyeh city in Kurdistan. Marivan’s Bazar has been closed and the telephone lines and internet have been dismantled.
Marivan is under a state of siege and according to social media, the number of SSF and police have increased.