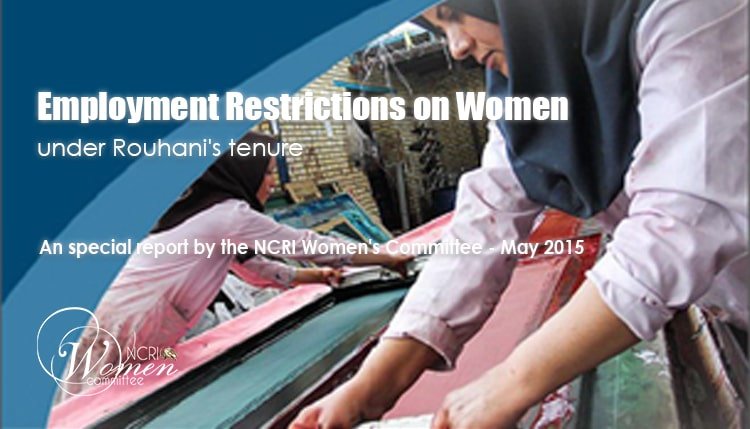 In June 2015 in Iran, Rouhani’s government will start a new recruitment process in Tehran to hire employees for its embassies. The assessment for suitable candidates is held twice a year in June and November. The terms and conditions determined prior to the assessment simply deprive women of the opportunity to get governmental jobs. According to the official guidelines, amongst 2800 people, 2284 jobs are reserved for men, and 500 positions are shared by men and women with only 16 jobs left specifically for women.

During the eight years of Ahmadinejad’s presidency, women’s unemployment rate doubled. Should companies face any problems or financial crisis, female employees are the first to be fired and gender discrimination is persistent. Statistics reveal that in the past nine years, over 100,000 women have been excluded from the workforce in Iran. According to Iranian statistics, in 2005, women constituted approximately 3,961,000 of the country’s total employment rate. However, women’s employment has reached 3,145,000 within the last year, which represents a significant decrease. The statistics prove that an average of 100,000 women have left the workforce annually.

Rouhani made many promises during his electoral campaign, from liberating the political, cultural, and social atmospheres to creating equal opportunities for women, including safety and security along with insurance for housewives. Not only none of those promises have been fulfilled so far, but women are facing more adversities on a daily basis. The government employment programs and strategies used in recruitment do not practice equal distribution nor give equal chances to women in positions related to economic, social and political fields. This is while without women’s contribution to the household income, living would be impossible. According to the official statistics 2,500,000 women are the only breadwinners of their families. Only 18% are employed, the rest being jobless and their families living in terrible poverty.

Rouhani’s government restrictions imposed on women have pushed them towards the unofficial job market, where they are exposed to a variety of pressures, dangers, exploitation and extortion. Pensions and insurance do not exist in this market and even those with high education levels are subjected to such exploitation.

Efforts to eliminate women from the workforce and political sphere have continued under Rouhani’s tenure. In July 2014, ISNA state-run news agency reported an undisclosed bill by the Council of Deputy Mayors in Tehran’s Municipality stressing that all senior managers and employees must only be selected amongst male candidates.

The misogynistic plan of population growth

The Iranian regime’s insistence on increasing demography will become a major obstacle for women who are seeking financial and personal independence. Khamenei, the mullahs’ so-called supreme leader, has said that the country’s population must very quickly reach 150 million people. In order to achieve that goal, the regime prefers to restrict women by forcing them to serve as reproductive tools, limited to family affairs and “providing comfort to men.” Rouhani is currently preparing such a project. His representative for women’s affairs has presented a plan on population growth to the parliament.

Women’s unemployment rate since August 2013 has exponentially been on the rise. According to Iran’s Centre of Statistics, this rate for female job applicants has increased from 32.6% in 2005 to 43.4% in 2014. Education and health are primary fields of women’s employment.

Gender discrimination in agriculture and industry has been a big factor in female unemployment. The majority of jobs in teaching and health services, such as nursing, are held by women.

The data from Iran’s Centre of Statistics reveals that in autumn 2013 men’s contribution to the economy was 62.1% when women contributed 11.3%. While the rate of unemployment in this season reached 2,401,000, unemployed women between the ages of 20 to 24, made up about 48.8% of the total.

On September 25, 2014, state-run Mehr news agency put out a report on the wave in female job applicants and spoke about a “record of housewives jobseekers”. It referred to unfair competition in the job market because of patriarchy in Iran. “The opportunity for women to obtain a job is half less than men. For men between the ages of 15-24 in the spring of 2014, the unemployment rate was 20% and 43.4% for women in the same age group”.

Rouhani’s government continues to deprive educated women from employment opportunities. According to the census conducted in 2011, women with high levels of education were 18.4% and men 18.2%; which means that they have surpassed men in higher education. In addition, women constitute more than 60% of applicants and students in universities. However, a large number of female students are denied acceptance into the labor force after graduation. During ‘Women’s National Conference’ held in Iran in January 2014, it was said that only 25% of educated women enter the job market in Iran. The rest become housewives and their economic participation that year was 13.7%.

In November 2013, the average rate of women’s unemployment, even in Tehran which is the heart of administrative and industrial centers, was 21.6%. In fact, women are first and primary targets of layoffs, wage inequality and gender discrimination.

Prohibiting women from employment in various occupations has been on the rise and even assisted by Rouhani’s government. A year after Rouhani’s election, the head of the State Security Forces in August 2014, banned hiring women in cafés, coffee shops and traditional restaurants. According to IRNA, regime’s official news agency, Katayoun, the manager of a coffee shop in Tehran said, “This project will destroy the job market for women and will make them even more vulnerable; they will be compelled to seek jobs that are very regrettable in order to compensate for the loss and support their families.” (Oct. 12, 2014).

According to official statistics in the past eight years, although women make up 50% of the country workforce, annually more than 100,000 of them have been laid off their jobs. In 2014, Tehran’s Municipality proposed a plan that targets gender segregation in organizations and government agencies.

In August 2014, dozens of the Iranian regime’s MPs called for a priority in reviewing a bill to reduce women’s working hours in Iran. According to this bill, women having children under 12 years of age must work part-time. The government wants a “female-free” work place.

The state-run Fars news agency quoted Fatemeh Alia, from the parliamentary Social Committee, saying that 57 Members of Majlis have asked to give priority to this bill. It was passed during Mahmoud Ahmadinejad’s mandate and has been implemented during Rouhani’s.

According to the bill, women with children 7 years old and younger, not only must work less, but also in specific hours of the day. Some female members of the Iranian regime’s parliament are not even satisfied with this version and are seeking to have mothers staying home until the last child has reached the age of 12. Fatemeh Rahbar, heading the Iranian regime’s parliament’s female members, even stated that “children in primary school are at ‘high risk’ and if we can reserve part-time jobs for women with school-age children, then we can say that we have done a pious action in making a better future for our children.”

Rouhani has been and still is a key figure in serving and preserving a misogynist regime, despite his deceptive slogans, and rhetoric. This religious dictatorship is not able of reform in women’s employment, neither in education, family laws nor human and women’s rights as a whole. Any positive changes in women’s rights will lead to an increase of the society’s expectation and will put the mullah’s regime’s existence at the brink of overthrow.