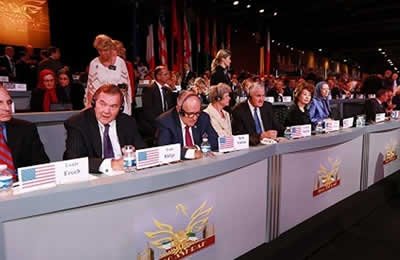 “United against Islamic fundamentalism and terrorism, change of regime by Iranian people and Resistance”
Speech by Maryam Rajavi “Democratic and non-nuclear Iran with regime change”
600 parliamentarians and distinguished political figures from five continents participate in this rally

On Saturday, June 13, over 600 legislators and distinguished political figures from various political affiliations and prominent jurists will participate in the great rally of Iranians and supporters of the Iranian Resistance in Paris. This rally titled “United against Islamic fundamentalism and terrorism, change of regime by Iranian people and Resistance” will begin at Villepinte Exposition Centre in Paris at 1 pm where dignitaries and delegations from 69 countries from five continents will participate.
Mrs. Maryam Rajavi, President-elect of the Iranian Resistance, in her speech titled “Democratic and non-nuclear Iran with regime change” will talk about the nuclear negotiations, the destructive consequences of the persistence of the policy of appeasement with the clerical regime, the expansion of extremism in the region and the worldwide, in particular the three deadly wars in Syria, Iraq and Yemen, and the solutions to these crises.

In the rally, 87 personalities will offer speeches on behalf of a variety of political delegations from various countries. Among the participants there are many prominent women from the political and women’s rights arenas, including Kim Campbell, former Prime Minister of Canada; Rita Süssmuth, former President of German Bundestag, Linda Chavez, former White House Director of Public Liaison; Frances Townsend, Assistant to U.S. President on Homeland Security and Counterterrorism (2004-2008); Michèle Alliot-Marie, France representative to European Parliament and former Minister of Defense, Interior and Justice (2002-2011); Hoda Badran, Chair of Network of Arab Women from Egypt; Rabiha Diab, Minister of Women’s Affairs for Palestine; Maria Candida Elmeida, Attorney General of Portugal; Martin Vallton, mayor of Villepinte; Sabine Leutheusser-Schnarrenberger, former German Minister of Justice; Ingrid Betancourt, former Presidential candidate in Colombia; Maria Teresa Fernandez de la Vega, former deputy Prime Minister of Spain; Rama Yade, former French Minister of Human Rights and vice President of the French Radical Party; Liliana Minca, vice President of Romanian parliament; Maria Grecea, member of European Council from Romania; Merdith Bergman, senior member of Labor Party and former Speaker of Australian Senate; Ranjana Kumari, women activist and sponsor of Beijing+20 Regional Review Meeting ; Oinikhol Bobonazarova, mother of human rights of Tajikistan; and Aneesa Ahmed, former Deputy Minister of Law and Gender from Maldives.
A number of distinguished international figures shall voice their solidarity with this rally by sending video messages, including U.S. Senators Joseph Lieberman, candidate for vice President; John McCain, Chairman of Armed Services Committee; Bob Menendez, Chuck Schumer, Tom Cotton, and Roy Blunt; also leader of House Democrats Nancy Pelosi, Chairman of House Foreign Affairs Committee Edward Royce and ranking Democrat Eliot Engel; Ted Poe, Chairman of House Foreign Affairs Subcommittee on Terrorism, non-Proliferation and Trade; Ileana Ros-Lehtinen, Chair of House Foreign Affairs Subcommittee on Middle East and North Africa; Judi Chu, Brian Higgins and Tom McClintock from the Congress.
Among 33 prominent figures from the United States to speak to this gathering there are a 3-member delegation from the U.S. House and an 8-member delegation of legislators from the State of Arizona. Other speakers are: three U.S. Presidential candidates, former Chairman of Joint Chiefs of Staff of the Armed Forces, former Secretary of Homeland Security, former Directors of FBI and CIA, former Commandant of Marine Corps, and former Chief of Staff of U.S. Army.
A 16-member delegation from the European Parliament composed of MEPs from Britain, France, Italy, Spain, Belgium, Estonia and Bulgaria will participate in this gathering to voice their solidarity and support for the Iranian Resistance.
A 60-member delegation from Middle Eastern and North African countries includes representatives from the Syrian coalition and Free Syrian Army, a Palestinian Minister, three prime ministers and ministers from Algeria, Egypt and Jordan. These officials from fifteen countries in this region including Palestine, Saudi Arabia, Egypt, Iraq, Syria, Lebanon, Jordan, Kuwait, Bahrain, Algeria, Tunisia, Morocco, Yemen, Mauritania and Comoros will participate in this great rally.
Two-hundred dignitaries from 22 European Council member states, including Chairman of the European People’s Party Group (EPP) and legislators from Italy, Romania, Portugal, Finland and Switzerland are to participate in this event.
A 40-member delegation from the French National Assembly and Senate, former ministers, elected officials, and youth representatives; three British parliamentarians and a former Attorney General on behalf of a political 20-member delegation composed of legislators from the Houses of Lords and Commons and high-ranking officials of this country; former President of German Bundestag and former Minister of Justice and former Deputy President of the European Commission on behalf of a 10-member delegation of German dignitaries; the Foreign Minister of Italy; the former leader of Labor Party and former Special Representative of UN Secretary-General (2009-2011) from Netherlands; and eight Albanian legislators composed of former prime minister and ministers on behalf of a 30-member delegation of officials from that country are other speakers to this grand event.
Speakers will discuss Iranian regime’s aggressive interventions and destructive role in the region, particularly in Syria, Iraq and Yemen, that have given rise to humanitarian tragedies in these countries; the challenges in the negotiations between P5+1 and the Iranian regime aimed at reining in mullahs’ nuclear program; and ultimate solutions to confront terrorism and Islamic fundamentalism, as well as how to prevent Iran from acquiring the nuclear bomb.
Nargess Azdanlou will speak on behalf of People’s Mojahedin Organization of Iran (PMOI/MEK) Central Council in commemoration of the 50th anniversary of the establishment of this organization.
Mohammad Hosseini (Cack Baba Sheikh), Secretary General of Iranian Kurdistan Struggle (Khebat) will also offer a speech to this event.
Likewise, 150 representatives of the Iranian youth organizations abroad and 300 representatives of the Iranian communities in various countries who worked hard and played a prominent role to prepare different aspects and stages of this gathering will go on the stage and some of them will address the audience.
There will be programs in this event to pay tribute to the martyrs and the political prisoners.
Artistic programs, including performance by a Filharmonic orchestra, are among the other programs in this great annual event of the Iranian Resistance.

Secretariat of the National Council of Resistance of Iran
June 13, 2015

Attachment:
Names and titles of speakers to the great rally of Iranian Resistance in Paris – Villepinte