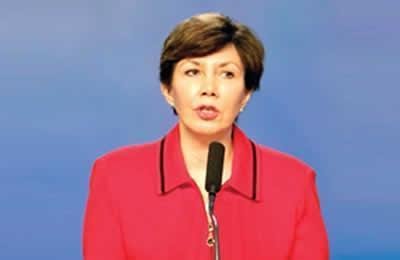 I would like to say a few words to you myself like Rudy Giuliani I also worked for President Ronald Reagan. And I Would tell you it is a great pleasure to being here in Berlin today because the last time I was here was in 1987 and Berlin was a very different city at that time, a wall divided this city, a wall enslaved half of the German people, a wall that stood from ideology that in fact enslaved much of Europe at the time and President Reagan came to Berlin and stood Brandenburg gate in 1987.

And he said to his soviet counterpart Mikael Gorbekav, “Mr. Gorbekav tear down that wall,” and in fact, the wall came down. At that point, the world was divided into east and west with the eastern ideology of communism enslaving so many.

They act as if the election of Hassan Rouhani meant anything different to the people of Iran. Yet, since Mr. Rouhani has been the head of that country, the nominal head because the real heads are the Mullahs. But, since Mr. Rouhani has been in power there have been more people hanged than there were prior to his coming. There have been more women who have been jailed and persecuted under Mr. Rouhani. We, in the West are very focused today on the threat Islamic fundamentalism and its various manifestation and we have been particularly focused on what is happening in the Middle East, when in Iraq in particular, with the Islamic state in Iraq and Syria, ISIS as it is known and we have been captivated by the pictures of the Jordanian pilot who was viciously burned to death, burned alive for the entertainment and the recruitment of more followers.

And so, we have been very focused on what’s been going on in Iraq as ISIS has taken more and more territory but as we sit here today in Berlin, the fight for the city of [inaudible 00:05:24.00] is going on but it is not the forces of the west, the forces of democracy, the forces of liberty that are taking on ISIS unfortunately it is simply another evil group, the Iranian forces, the [inaudible 00:05:43.05] force that are in fact supplying so many of the 30000 militia and regular forces that are taking on that city.

Well, I’m here to tell you that, that wall of ideology threating all of us and if the Iranian regime is able to get nuclear weapons and they are this close to having those weapons now. If they are able to do that it will not just be acid thrown in the face of women, it will be nuclear wastes that will rain down on all of us when this regime has those weapons and let me just say [inaudible 00:06:33.19] one final word because I talked about the invisible wall of Islamic fundamentalist that enslaves some many, there is a physical wall as well that is enslaving people that the United States promised to protect and that is the wall around Camp Liberty.

Camp Liberty now is home to hundreds of Iranian who have no place to go because too many countries have refused to open their doors to them. Albania is one of the few countries that have taken in these brave people. So here in Berlin, I say, in memory of President Reagan, there is another wall that must be torn down and I say to President Barack Obama and I say to Prime Minister Alabatti in Iraq tear down the wall of Camp Liberty, let our people go.