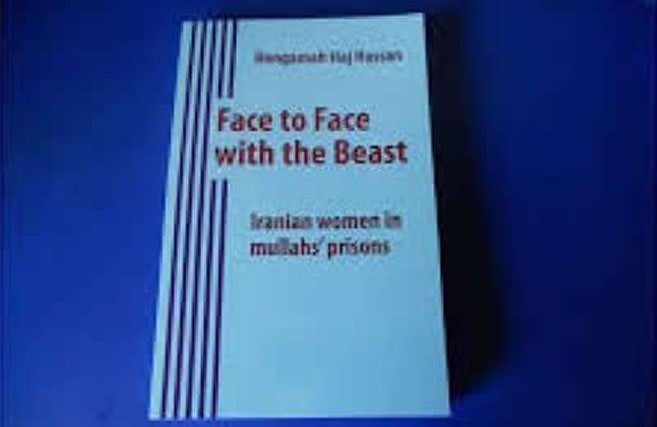 “Face to Face with the Beast” in Khomeini’s Prisons

Newsblaze – This is a book about Iranian women in the mullahs’ prisons, as told by Ms. Hengameh Haj Hassan.

Earlier this year, the UN described the numbers of executions in Iran as “deeply troubling,” with more than 320 people put to death between 1st January 2015 and end of March 2015.

In 2014, Iran executed 721 people, according to the U.S-based Iran Human Rights Documentation center.

President Hassan Rouhani’s two years in office have witnessed a record-breaking number of executions with more than 1,700 people murdered by the state since 2013. The actual numbers may be higher due to what is called “unexplained disappearances.”

It is widely known that executions by hanging or firing squads in Iran have been a daily occurrence since the Khomeini revolution in 1979.

In August 2004, a girl of 16 was hanged in public by the religious judge of the town of Neka in Iran because she was a “chatterbox” at her trial.

The Book: Face to Face with the Beast

In her book “Face to Face with the Beast” which was beautifully translated into English by Carolyn Beckingham, Ms. Hengameh Haj Hassan, a hospital nurse in the early 1980s, exposed the appalling inhuman treatment, abuse, the systematic torture and beatings of women and girls in Khomeini’s prisons. Execution of women and girls as young as 13 and 15 were commonplace.

In her three years in prison, she suffered abuse, torture and bullying and witnessed inhuman treatment of women and children. She says “from the evening of 20th June 1981 the executions began including those of students and school-children. The Mullahs condemned people to death without even knowing their names. No due process, no defence and no proper legal procedures were observed.

Shekar, a friend of Hengameh said a meal in prison was limited to 4 beans per prisoner. The female inmates and some with babies were always hungry.

Unit 209 in Evin prison was notorious for its torture sessions. “The smell of blood and sweat saturated the air.”

Girls were subjected to beatings and torture. In the evening the sound of executions by firing squads can be heard regularly. Being a sympathiser of the Mojahedin (secular resistance movement) is enough reason to be arrested tortured and executed. Even pregnant women were not spared torture and execution.

In Unit 246, there were 500 women and only two toilets were working. Long queues form all day long with many forced to relieve themselves in buckets or plastic bags. Out of 8 lavatories, 6 were always out of order. Forget hot water and toothbrushes. One cell of more than 6 women were sharing the same toothbrush. They had to endure a miserable state of hygiene and nutrition. They had not brushed their teeth for months until one of them found a dirty toothbrush by chance which they washed and shared.

When her friend Tahmineh was executed, Hengameh wondered why so many young people were torn to pieces because of the medieval selfish bloodthirsty old man, Khomeini?

“We were always hungry, given just enough not to die? Mothers of babies suffered most. They weren’t given baby food or powdered milk. The attitude of the jailers and torturers was “It’s better for the children of the Mojahedin to die.”

The book introduces us to two sadistic thugs who enjoyed their roles as torturers, bullies and executioners.

Ladjevardi was the chief torturer at Evin Prison he himself executed mother Mohammadi (mother of Ibrahim Zakeri) a known Mujahid. Hadji Davoud was a serial violator of human rights, a torturer and executioner.

The fate of Massoumeh

Massoumeh Azdanlou (sister of Maryam Rajavi) president-elect of NCRI. (National Council of Resistance of Iran). Massoumeh’s husband Massoud Izah-Khah was murdered by the regime. Massoumeh was 22 years old and pregnant when she was subjected to kicking, torture and execution in 1982.

The Sadistic Psychopath Hadj Davoud Rahmani, the director of Gezel Hessar prison was a thug, an uncouth bully, a torturer, a woman beater and executioner.

He made a child called Rouzbeh to witness his father’s death under torture. He was hated by all the female inmates because of his repulsiveness and brutality.

Under the supervision and direct participation of Hadji Davoud, the torturers every day invented new forms of persecution to break the prisoners. The torturers knew no bounds.

Khomeini had given them a free hand with a Fatwa (Islamic Edict) “The Lives, the possessions and the relations of the Hypocrites (Mujahedin and others opposed to the religious rule of the mullahs) have no value and no one will be held responsible if they die under torture.”

In other words, torture and executions had been sanctioned by the highest religious authority.

Shahin Jolghazi and Shouranguiz Karimi were held in a cage, abused, beaten, tortured and were finally executed in the 1988 massacre of prisoners.

Maryam Mohammadi Bahman-Abdi seemed happy one day because they reduced her sentence, but she was executed in the 1988 massacre.

Hengameh’s best friend Shekar was singled out for extreme abuse because of her strong personality. “Khomeini’s cannibals had forced her to do things that had crushed her like other girls. She suffered a great deal with perpetual torture sessions and illnesses. She had become weak and crumpled.” Despite all that, her spirit remained as strong as a mountain until her execution.

Not wearing the hijab or headscarf was a major offense punishable by prison, beatings, torture even death. Even caring for a wounded prisoner was considered a crime.

Mehranguiz a civil servant was arrested in the street. She was troubled to see her cellmates taken for torture and executions. She kept on repeating: “I could never have imagined the Mullahs could do this.”

———–
Nehad Ismail is a writer and broadcaster, who writes about issues related to the Middle East from his home in London.

Water cut off in Qarchak women's prison, un-fasting prisoners threatened to be dealt with