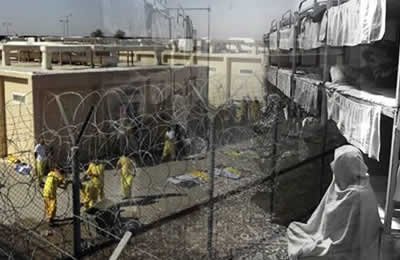 Water cut off in Qarchak Prison, un-fasting prisoners threatened to be dealt with

Water has been cut off over the past days in the heat of summer in Varamin’s Qarchak Prison for women, aggravating the already inhuman and intolerable conditions in this notorious camp, also known as Kahrizak II.

Kahrizak prison was a barn with miserable conditions where 2009 protesters were imprisoned and viciously tortured to death.

Since Thursday, June 18, the prison officials have been continuously making threats from loudspeakers to flog women who eat or drink during fasting hours.

To step up pressure on female political prisoners, the clerical regime transfers them to Qarchak Prison where common criminals are held.

Fearing the growing discontent in various social strata and another outburst of protests, the clerical regime is not able to stop the cycle of crimes and repression even during the month of Ramadhan, but uses the fasting rituals as a leverage to intensify repression under various pretexts.

Secretariat of the National Council of Resistance