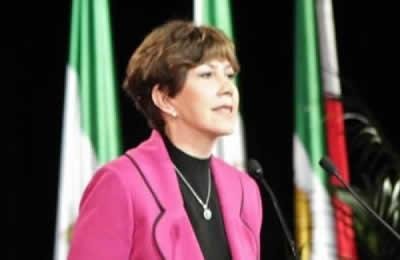 All of you here today, every year that we have this event in Paris, the crowds grow.

This year we are expecting 100,000 people from every part of the globe, all of you, here to express your desire for freedom for the people of Iran, and democracy. The current regime in Tehran does not represent the Iranian people. The mullahs represent the past.

They represent a threat to the peace and security of all peoples in the world as they pursue a nuclear weapon. They are on the brink of being able to become a nuclear nation. And if they are not stopped, they will be a threat to every peace loving person in the entire world.

Today you will be joined not just from those who share your Iranian heritage, not just from those who share your Muslim religion, but you will be joined from freedom loving peoples from all over the world. We will have today, and you will hear over the course of the events today speeches and see on these stage representatives who represent dignitaries from over 600 individuals who have been in influential positions in their own government. You will hear from and see representatives of 120 Parliamentarians from around the world from the United States and other countries. And we are here to show that we are in solidarity with you. Now there is only one path to take, and that one path is to engage with the resistance to the mullahs in Iran.