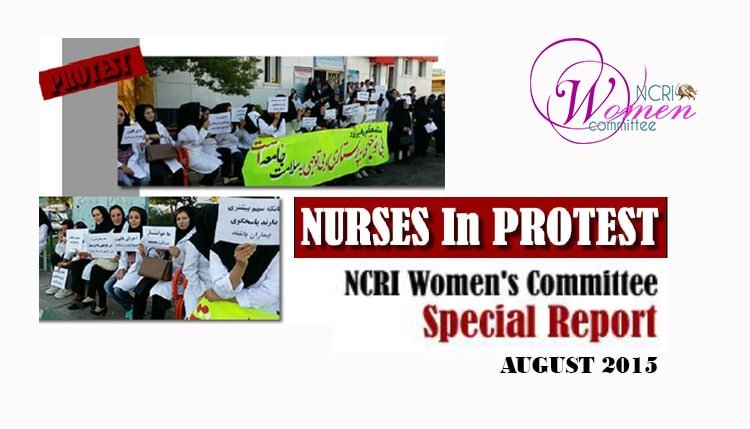 It is now 10 days that the nurses sector, most of whom are women, are in a sit-in.

They have one specific demand: the observation of the nurses’ rights based on their work hours. The truth is that after the Rouhani government took to office, Iran’s nurses have been faced with a significant drop of their wages and bonuses. They have been faced with a plan by the ministry of health called “payment upon action”. This plan is in practice working in contrary to its name. Based on this plan, the nurses’ wages must be paid upon their work hours, yet it is going into the pockets of state supporters.

The nurses say that currently the nursing system is acting against them and the only path left is to stage protests and gatherings.

The following report is a summary of their gatherings:

Nurses in the cities of Tehran, Tabriz, Yazd and Chalous staged gatherings in protest to low wages and poor living conditions. They were shouting one thing: where is our wages? There is discrimination and difference in payments! On this day, Tabriz witnessed the gathering of many nurses. They also staged gatherings at the Razi, Madani, Sina and Shohaday Tabriz hospitals.

Hundreds of nurses in Tehran took to the streets to express their protest. The staff and nurses of the Rasoul Akram Hospital in Tehran demanded the improvement of their living conditions.

Nurses gathered outside the medical science university building in Hamedan. Physicians, hospital staff, laboratory personnel and hospital nurses in Hamedan staged a gathering in protest to the implementation of the Qasedak plan in the ministry of health. They chanted: “Enough talking, act!”

Staff of the Khatam Alanbiya hospital in the Aslaviya area, including nurses and physicians stopped working in protest to not having work contracts.

Nurses of the Alzahra hospital in Esfahan in protest to the government’s implemented plans, staged a gathering. This was their second protest gathering in one week.

60 nurses and hospital staff staged a gathering in Tabriz. They closed down the surgery room and protested to the plans of Rouhani’s ministry of health.

Tehran – from 10:00 AM nurses of the Resalat Hospital in eastern Tehran stopped working. Their demand was fair wages for their work.

Also, on this day a number of staff members and nurses of the Razi hospital in Tehran staged a sit-in. They stopped working for several hours to protest to low wages and poor living conditions.

Workers and nurses of the Loghman Hospital in Tehran staged a gathering at the hospital. They were protesting to the ministry of health’s injustice against them.

Also, there were reports of a gathering of 130 nurses from the Payambaran Hospital in Tehran’s fifth district. They were protesting to the Rouhani government ministry of health’s implementation of wrong plans.

A group of nurses from the Khomeini Hospital staged a protest gathering in the hospital area.

Ilam – Nurses from the Hazrat-e Masoumeh Hospital staged a protest gathering. They were protesting to labor discrimination and mandatory work without payment.

Shiraz – A group of nurses and medical students from the nursing university of Hazrat-e Fatimeh of this city staged a protest gathering.

Kerman – A group of nurses from the Kashami Hospital in Kerman staged a gathering. They gathered outside the administration building.

Yasouj – A group of nurses from the Imam Sajjad Hospital in Kohgeuliya and Boerahmad. They were protesting to the health ministry for not implementing its plans.

Tehran – Nurses from the Sina Hospital staged a protest outside the emergency section of the hospital. One of the protesters said that not implementing the health plan is an insult to Iran’s nursing society and we are protesting to that.
Hamedan – More than 100 nurses protested in this city. They were protesting outside the medical science university.

Shiraz – Nurses of the Rajai Hospital staged a protest about not receiving this year’s wages.

All around call for nurses protest gathering:

"Like Moses' mother, I left my children to the care of the Nile", Iran activist says