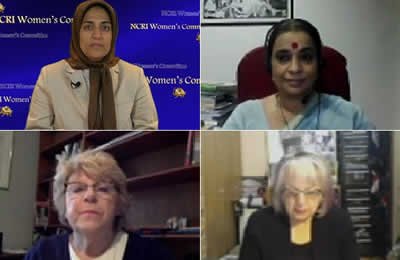 The NCRI Women’s Committee held an online conference on August 13, 2015 with the participation of distinguished guests from India, Australia and Canada to discuss the devastating record of women’s rights violations in Iran.

Ms. Elham Zanjani, from the NCRI Women’s Committee opened the question and answer session by outlining the recent executions of women under Rouhani’s tenure and explained the newest laws ratified by the Iranian regime’s parliament to step-up the repression against women in Iran. She emphasized that such a regime should not be eligible to attend the up-coming UN Women’s Summit unless the first guarantee by the regime is to comply by international standards, including the CEDAW – a convention that has been adopted by the UN agency to protect women from any form of violence.

The panellists included Dr. Ranjana Kumari, a women’s rights expert from India, author of 9 books and winner of 2015 Lotus Leadership Award, Dr. Meredith Burgmann, Former President of the New South Wales Legislative Council from Australia and Ms. Raymonde Folco, a former Canadian MP and a consultant for the National Democratic Institute as Senior Program Manager for Gender Programming in Mali and with UNWomen.
Folco gave a very thorough report on the situation of women in Iran and stressed that following such a record of violation of women’s rights, the Iranian regime’s presence at the UN Women conference is unacceptable. She highlighted the irony stating that if we believe women’s rights are human rights, the Iranian regime should not be allowed to participate because it “does not protect women the way they should be”.

She said that new laws have just been passed by the Iranian regime’s Parliament that legalises violence against women in Iran. However, emphasised that “Iranian women will not be silenced. They have participated in demonstrations and made their opposition to the regime known, despite the grave danger they are exposed to.”

Following a question from a journalist from the Middle East on why the Iranian regime has increased its repression against women, Dr. Kumari stated that there is a need to stand by Iranian sisters and tell the regime that such repression is unacceptable and the international community will not accept this. When the International community puts the demand to end the violation of human rights as the main basis of any talks, the regime will be forced to abide by international standards. Also, the regime wants to supress women as much as they can, especially when faced with the growing strength of women. Therefore, there is a need to strengthen an international network.
When asked what can be done to change the situation in Iran Ms. Folco said that although violence is not favourable, the people need to rise against the regime. Dr. Kumari said that we need to “reach out to women across the globe, especially those that have strong voices in their country. It is our responsibility to do something for our sisters who are being brutalised.” Dr. Burgmann emphasized that there is an urgent need for regime change because change from within such a despotic regime is not possible.

One viewer asked what role do the women in the resistance play. Dr. Burgmann said, “It is (Iranian Resistance) run by women!” She underlined that women have a large role in the Resistance – so much of the ideological input is from women. Ms. Folco said that Mrs. Rajavi is an “example to women around the world” and Ms. Zanjani added that she “is an inspiration to the women in Iran who have never given in to the regime”. She said that Mrs. Rajavi and the women of the resistance give these women the strength to continue their fight.

At the end of the session, each panellist was asked to pass on their message to the women of Iran. Dr. Burgmann expressed her empathy to the women in Iran and reassured them that in Australia she is working with an organisation that has the goal of achieving democracy in Iran.

Ms. Folco wanted the people of Iran to know that Canada is doing a lot in the fight for freedom in Iran. She confirmed that she is involved in groups that meet regularly and inform the Canadian government so that they can “do the right thing when the time comes”.

Dr. Kumari pleaded to the Iranian women to keep faith and assured them that if history serves as a lesson, the regime will not last long. “Now is the time to fight back,” she said.

Iran teachers: we will return outside Parliament next Sunday