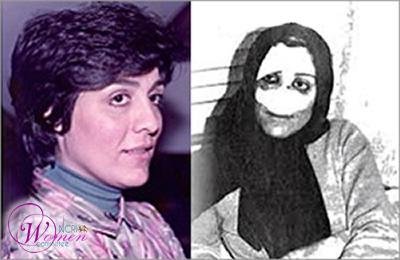 Shahla Hariri Motlagh was one of the resistant women whom the executioners held a particular hatred against.  She was in charge of one of the polling stations during the first parliamentary elections in 1979 when Massoud Rajavi, the Iranian Resistance’s leader, was running for candidacy.  She was attacked by the Iranian regime’s vigilantes during this time and became hospitalized shortly after.

A picture taken of Shahla during Massoud’s visit to the Mojahedin’s headquarter in Tehran was published in the resistance’s newspaper and this caused great turmoil.

Shahla was Dr. Iraj Fazel’s wife, the Minister of Health during Rafsanjani’s presidency, Khomeini’s personal doctor and a devoted agent of the Iranian regime.  The regime’s intention was to aggravate the Mojahedin’s situation by creating problems through Shahla’s husband whom she was able to successfully expose their plans from.  When she was arrested, she was charged with despicable accusations.

Although there was a lot of pressure on Shahla, she never changed her mind about wanting a revolution and her infinite love for her people.  Shahla’s cellmates recall many memories of this brave heroine; such as the memoire written by Robabeh Boudaghi, a slain PMOI member who wrote, “Shahla was tortured so extensively such that they couldn’t perform operations on her feet.”  When they realized that physical torture would not make her surrender, they turned to psychological abuse through the use of motherly emotions.  Shahla was a mother of two. The prison officials told herto go and visit her children, but she refused.  A few moments prior to her execution she said, “Underneath the soil, my corpse and every single cell in my body will forever damn and curse you all.  The way you butchers have treated my body will never be forgotten and you shall have to answer for each and every body part of mine on the Day of Judgment.”  Shahla did not allow them to cover her eyes with blindfold as they tied her up against a post to be executed by firing squad.  And she addressed the agents, “I want to kneel before my people with open eyes when you fire at me.”