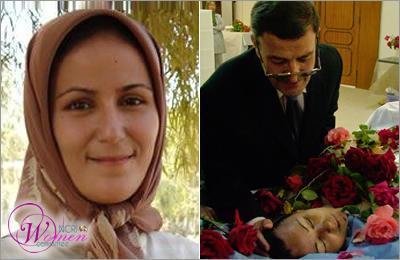 Ever since April 8, 2011, the day when I accompanied my daughter Saba* in her one-way journey, the color of spring has become of a different color to me. On that day, when I rushed to her aid at 9 am, I found Saba lying calm and patiently in an Iraqi ambulance. Deep down, I was very tense.

– “It’s nothing Dad, just a bullet in my leg,” she answered.

She was the one comforting me. On that day, I was not aware of the journey I had started with her and what was awaiting us. I also didn’t know that before my arrival, she had once gone to the brink of death, uttering with her last breath, “We will stand steadfast till the very end;” a message that has now turned to an inspiration for millions around the world.

Thanks to the sacrifice of a number of many Saba’s friends and other Ashraf residents who donated blood on the scene, our physicians were able to prolong her life for a few more hours.

From that day on, the color of spring is no longer the same in my perception. It is green, but of a mystical nature. To this day, after four years, Saba’s last words have gained a much deeper meaning for me.

Today, I also remember the message of four executed PMOI legends, including Nasser Sadegh, who once said, “We see the prow of victory in the vast ocean of nations.”

Saba’s words also lay heavily on my soul, and make me wonder how I did not understand that day, despite all her suffering, that she never said “I”, but “we”?  “We will stand… We are standing…” These words were not just a renewal of her oath to the People’s Mojahedin Organization of Iran; in fact, they were a vision of a distant future.

On that day, we were attacked in Camp Ashraf, located north of Baghdad, surrounded by a sea of conspiracies of the Iranian regime and its Western appeasers. For example, there was a barrage of deadlines imposed by former Iraqi Prime Minister Nouri Al-Maliki – on the orders of his godfather Khamenei in Tehran – and arrangements had been made to annihilate Ashraf once and for all. However, it is a miracle that today, four years later, we are still “standing” and seeing not only the “prow of victory”, but its entirety in the ocean of our nation and the nations of the regions. People across the Middle East are now rising against the mullahs in Iran like never before.

Today, I very much sense the presence of all of our martyrs, from the PMOI founders executed over 40 years ago, to the brave women who have sacrificed everything to fight against the misogynist mullahs in Tehran.

And each time, overwhelmed with this passion, I wonder if this is not the very meaning that our martyrs “are very much alive alongside God Almighty”?

The PMOI leadership, relying on the pledge of “Honesty and Sacrifice”, has shown the path and directed a resilient generation in Iran to stand against tyranny, a generation which is role model not just for its fellow countrymen, but also for all nations throughout the Middle East.

It is because of this feeling that on April 8, 2011 spring took on a different color for me. Persevering, standing with our heads high, and unshackling the chains of countless plots and conspiracies! Truly, is there anything more precious?

On that last journey with my wounded Saba heading to Baghdad, an Iraqi agent affiliated to the Iranian regime called me over and tried to take advantage of my fatherly emotions: Quit the PMOI along with Saba to save her life and place her under urgent surgery …

However, it was Saba who answered the man: “What did he say?” she asked. I told her the truth, on purpose, because at that point both the “Father” and the “Child” had to make a decision. In my utmost surprise Saba said, “Dad, why didn’t you slap him in the face?!”

I took a deep breath and stared proudly at her who had devoted her life to the freedom of her country. I saw that in her deep but sound eyes, she was envisioning something much farther in the horizon, or she would not have been able to give up her life so “easily”.

In the four years since that day, I saw that this “easiness” is truly God’s gift to us, Iranian freedom fighters in the PMOI. Now, it has been three years that we have been transferred to Camp Liberty, a deserted former US military compound near Baghdad International Airport. With all the bombs, missiles, and conspiracies targeting us, our vision remains focused on the prow of victory, and the sacrifice we make each and every day is the source of our energy. We have learned this from our predecessors and PMOI founding fathers, as we are “standing”, “standing to the very end.”

Nearly two years ago, on 1 September 2013, 52 other slain PMOI members stood strong against the Iranian regime’s Iraqi soldiers. They once again showed how we stand to the very end on our principles to bring freedom and democracy to our nation, Iran.

Today, I do not only see Saba, but all of them, all the 120,000 PMOI martyrs fallen in our 36-year long struggle against the mullahs, being very much “alive” and inspiring us to “stand to the very end”, to continue this glorious fight for the most precious of all God given rights to mankind: Freedom.

* (Saba Haft-Baradaran was killed in Camp Ashraf, Iraqi along with 35 others following a deadly massacre by Iraqi forces who attacked Ashraf at the behest of the Iranian regime. She was born in the Iranian regime’s prisons because both of her parents opposed the Iranian regime and joined the ranks of the Iranian Resistance when she grew up so that other children would not have to witness prison walls like she did. On the morning April 8, 2011, she was shot by a sharp-shooter in the thigh. She could have been saved if she received medical care and blood, however, under the direct order of Maliki, she was denied this urgent care. Her father was willing to give his daughter his blood but he was encouraged to leave the resistance if he wanted his daughter to survive. Worst, the US had promised her and her colleagues protection, the UN was even monitoring yet, Iraq’s former Prime Minister, Maliki obeyed the Iranian regime’s commands.)