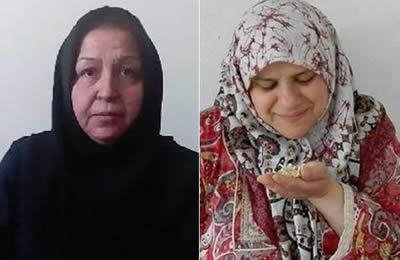 Two teachers affiliated to the ‘Erfan Halghe’ group were arrested on Tuesday, August 25, 2015 by the Iranian regime and transferred to Evin and Gharchak prisons in Tehran and Varamin, respectively. Both women were sentenced to a total of 7 years prison.

Fahimeh A’rafi was arrested at her home by agents of the Iranian regime’s Revolutionary Guards and taken to Gharchak Prison in Varamin to a serve 5-year prison term for “insulting the sanctities”. There was no written or oral warrant provided to Ms. A’rafi before her detention and she suddenly encountered agents arresting her.

The agents didn’t use the front entrance of the building because of the presence of video surveillance, to enter the vicinity of her home, and they managed to sneak into the parking lot of the apartment as neighbors were commuting. They entered the apartment building using the back door.

Ms. A’rafi has already been arrested twice before.
Ziba Pour Habib is another student of ‘Erfan Halghe’ leader Mohammad Ali Taheri. She reported herself at Tehran’s notorious Evin Prison and has now been transferred to Gharchak.