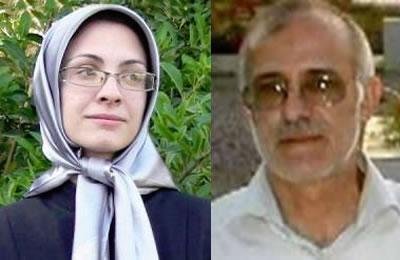 My Father a Political Prisoner at Imminent Threat in Iran

Hejrat Moezi, a 27-year-old political opponent of the regime ruling Iran, has written in The World Post about the plight of her father, a political prisoner in Iran. Hejrat left Iran in early 2008 and currently resides in Camp Liberty, Iraq,

home to thousands of members of the main Iranian opposition group People’s Mojahedin Organization of Iran (PMOI, or MEK). Her mother and sister are also in Camp Liberty. Her father, PMOI supporter Ali Moezi, is an agricultural engineer and a political prisoner in the Central Prison of Karaj in Iran.

Describing a person’s life is never easy, especially when that person is someone you cherish. Ali Moezi is my father, he is a political prisoner of Iran, and I fear losing him with each passing second.

Before I was even born, my father experienced the mullah’s prisons. In 1980, when the theocratic dictatorship took control of Iran, my father was arrested and tortured. He had been among those who stood in opposition to their tyrannical rule, and paid the price with several years of torture in the regime’s prisons.

My father was educated at the University of Karaj in agricultural engineering, and could have worked towards building up his homeland; Instead, he has spent years, off and on, behind bars. The theocracy has made it such that everyone finds himself leading a life unsuitable to their vocation: our scholars rest imprisoned while thieves and criminals are in government.

I recall asking him, when I was a child, “What happened to your knee?’ to which he responded, “it was hit by a bullet.” Only when I was older did I learn that he participated in peaceful demonstrations in Tehran in June 1981, and during his escape, he was shot and then subjected to hours of painstaking torture. At the time, my father would have been the same age I am now, 26. The whip marks left by his torturers can still be seen on the soles of his feet and his back.

Throughout my childhood, the thought of my parents’ arrest was my greatest nightmare. But one day, I myself decided to stand up against this government. I moved to Camp Ashraf and left my country for Iraq, where thousands of refugees and Iranian dissidents lived in a place that was our only hope for freedom. I remember, on my last day in Iran, looking into my father’s eyes and asking if I’d ever see him again…

Only a year had passed since my sister and I arrived in Ashraf when we learned that my father was arrested again. For what crime? Under Iran’s fundamentalist regime, there is no need to have committed a crime for them to arrest you. This time, my father’s crime was my sister’s and my presence in Camp Ashraf. He was arrested in Karajshahr in November 2008 and was charged with travelling to Ashraf, an act of “committing propaganda against the regime.” Under extreme torture, they took him into solitary confinement. They wanted him to conspire against his own daughters, but my father refused. He had always resisted their intimidation, even after he was diagnosed with cancer.

He was imprisoned for two years and released in November 2010. He would only taste freedom for seven months. In June 2011, the Ministry of Intelligence raided my family’s home, arrested my father, and took him to an unknown location. He had just recently been released from the hospital where he had surgery for cancer. For three long months we had no news of his whereabouts. My elderly grandmother knocked on the doors of various prisons every day with hopes of obtaining the whereabouts of my father.

After three months, I learned that my father was tortured by the Ministry of Intelligence for attending the memorial of Mohsen Dogmehchi, a deceased political prisoner. Don’t be surprised; in Iran, even participating in a political prisoner’s memorial is a crime.

But my father’s true “crimes” ran much deeper. The government really sought revenge for my father’s refusal to stay silent and give in to their charges. They veiled this revenge in legal dress, officially writing him up for having “acted against national security.” The judge on my father’s case knows nothing about law, and just produces what is dictated to him by the Ministry of Intelligence.

Over the last seven years, my father has been charged not once, but four times. Each time, he has refused his participation in the trials citing their lack of legitimacy and due process. Each time, henchmen beat him and forced him to court. In May 2015, a flock of thugs beat him so hard against iron railing that his forehead split. Disregarding the fact that he was near the end of his term, they sentenced him to an additional year of prison.

The charges are ongoing. In September 2015, they indicted him for sending a message to be read on his behalf outside prison to commemorate the loss of 52 lives at the hands of the government two years prior.

Due to my father’s resistance and bravery, these courts will likely still arbitrarily prolong his sentence. My father suffers from various ailments aside from cancer and has neared death on several occasions. Consistently denied medical treatment, information officers have threatened to keep him in prison and withhold treatment until he dies.

This is where my story ends, but it is not the end of my father’s suffering, nor that of so many political prisoners. From outside the prison walls, I have become the voice for my father’s struggle. He is not just a political prisoner; he is in the grip of a wolf whose claws are primed, without a moment’s hesitation, to take his life. Just tomorrow they can decide to execute him. I ask you to stand in their way and show them that humanity is still alive and well.

IN MEMORY OF REYHANEH JABBARI