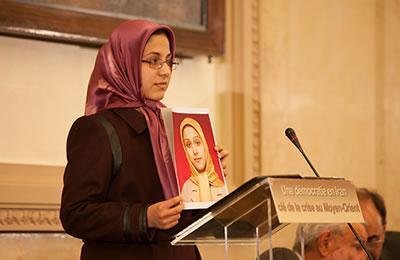 My Parents Are at Risk in Iran – Shaqayeq Azimi

The text of remarks at the French National Assembly on Tuesday (October 27) by Iranian dissident Shaqayeq Azimi, 22, whose parents were recently arrested in Iran by the fundamentalist regime for supporting the main Iranian opposition group, the People’s Mojahedin Organization of Iran, PMOI (Mujahedin-e Khalq, MEK):

I want to thank the French Parliamentary Committee for a Democratic Iran for giving me the opportunity to speak to you today.

My name is Shaqayeq Azimi, 22 years old and a member of the People’s Mujahidin Organization of Iran (PMOI, or MEK).

Today, I am here to speak about my parents who are in jail.

On October 14th, I was informed that my parents have been arrested a few days earlier in Iran.

The arrest was solely due to the activities of me and my sister, and for being supporters and sympathizers of the PMOI.

Both my parents are ex-political prisoners. My mother suffers from MS and she has spent about 10 years in prison. From 1981 till 1986 in a horrific place called “Residential Unit”, where female prisoners were under severe pressures. Most of the people that were placed in these units never survived or lost their sanity. These tortures caused her to get MS, from 2009 till 2011 because of visiting me and my sister Niloufar in Camp Ashraf, again in 2012…and now once again she faces severe risks currently both due to her health and also condition in prison.

Also, my father who is suffering from heart problems has been persecuted both during the Shahs time and under the Mullahs’ rule.

Despite all these pressures, once my parents told us: We will not stop our activities against the Mullahs and we always get hope from you and your struggle.

This is how my parents and thousands of political prisoners are resisting in tyrannical prisons! And I am proud of having such parents.

The price for freedom isn’t limited to being imprisoned, many have lost their lives struggling against this evil regime. One of them was my dear cousin, Nastaran Azimi, who I grew up with. She was a computer major in Tehran University and an artist.

Unfortunately, she was slain in the deadly attack by Iraqi forces on Camp Ashraf on April 8th, 2011.

While my family and others are suffering under torture in prison, some here in European talks about “moderation” in Iran.

It is painful to see European Ministers rushing to Iran, shaking hands with those who are responsible for the suppression of Iranian people but remaining silent about these atrocities. When German Foreign Minister visited Iran recently, a group of political prisoners at great risk sent him a message, a part of the message said: “We the political prisoners do not welcome your visit to Tehran and your meetings with the Iranian regime’s officials. However, if you should decide to go ahead with this visit, we wish to invite you to pay a visit to the prisons and listen to our views…”

Today I am here to be the voice of the voiceless, the voice of my parents and all political prisoners who are suffering in medieval prisons of Iran, the voice of young men and women who lost their parents, innocent people that are being hanged on cranes in public My message on behalf of them is clear:

Rouhani is a murderer and should be taken to the international criminal court.

At last, I would like to say to my parents and all innocent political prisoners that: We are proud of your resistance. This regime will be gone and we will see you once more in a free and democratic Iran, keep your hopes as we do and never give up, as we won’t!