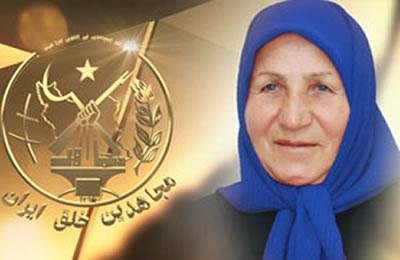 Ms. Fatemeh Abbasi, an elderly mother in Camp Liberty, Iraq, who was active with the Iranian Resistance for the past 34 years, on Tuesday lost her life in the camp’s clinic.

Ms. Abbasi, 77, had been suffering from cancer and was not approved by doctors with the International Organization for Migration (IOM) to be transferred to Albania for treatment.

The October 29 terrorist rocket attack on Camp Liberty by agents of the Iranian regime caused her great physical distress and shock. She eventually passed away at 19.45 local time on Tuesday.

Ms. Abbasi, known among the members of the People’s Mojahedin Organization of Iran (PMOI, or MEK) in Camp Liberty as Mother Fatemeh Abbasi, was imprisoned by the mullahs’ regime in Iran between 1982 and 1985.

Her elder son Abolfazl Mollaie, a member of the PMOI (MEK), was executed by the regime in the city of Zanjan, north-western Iran, in 1991.

Ms. Abbasi is survived by her two daughters and two sons in Camp Liberty.