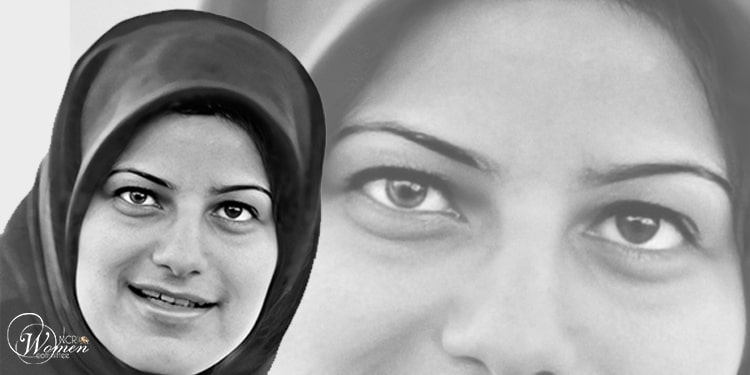 The day they called to transfer me to the public ward, I felt heartsick.

A fellow detainee in solitary confinement beside Azam:

“The day they called to transfer me to the public ward, I felt heartsick.

The communications we had through the knocks on the wall during all these months were to be ended. I felt they were putting me in exile. But when they took me out, I saw that they had also brought out the single prisoner of the next cell, the one who was my only companion in my solitude. Seeing her, I felt peace and satisfaction in my heart which was a tremendous treasure shining in the darkness of prison.”

She was an employee of the Educational & Cultural Center and hoped to play a role in improving the rich Iranian culture after the revolution and passing it on to children. However, she realized soon that her dream would never come true under the mullahs’ absolute dictatorship, the tyranny which had stolen the people’s revolution.

Her hope had been betrayed. Her aspiration was trampled and it was not clear how long her belief in liberty would be enchained in the hands of the fundamentalists. But Azam did not lose hope. She found her dreams in the People’s Mojahedin Organization. She quickly supported the organization.

We would wake each other up every morning for prayers by taping Morse Code on the wall. Then we did exercises, we gathered news and then passed this news on to the other cells. Sometimes we talked to each other for hours about various social, political and organizational issues, of course all through Morse Code.

The day they called me to transfer me to the public ward, I was very saddened. The relationship I had built through tapings of Morse Code with my neighbor all these months was to end. I felt as if they were sending me into exile. However when I was brought out, I saw they had also brought the single prisoner of the next remaining, the one in the cell beside me too, the one who was my only companion in my solitude. Seeing her, I felt peace and satisfaction in my heart which was like a tremendous treasure shining in the darkness of prison.

Azam had a large tumor on her spine and, if it were to be struck on, she would have become paralyzed. Because of this, she endured severe pain but was always among the most energetic people. She was the first to participate in ceremonies and used her creativity in the hard prison conditions to bake sweets and cake with whatever she could find.

Azam was very profound and precise, which distinguished her from others. Her positions were always very straight and clear vis-a-vis the henchmen. Thus, she spent most of her prison-term in solitary confinement.

One day they wanted to transfer her to the public ward. She believed the henchmen were trying to put her under pressure to get an interview from her. When they arrived to the cell, she refused to go. Despite the guards being aware of her heath conditions, they brutally kicked and punched her. They ruthlessly tried to hit her on the back. She used all her energy to stick her back to the wall in order to prevent them from causing even more serious harm to her.

Although the henchmen had beaten her, they had not won; they finally left her by the wall to ask the warden (Hosseinzadeh) what to do with her. They retuned her back to solitary confinement where she waited two more months until she was to be executed.

According to her sister, Azam’s prison-term was to be ended on September 8, 1988 and her family was preparing for her release. However, Khomeini reacted sadistically after signing the peace agreement with Iraq to end the war. He cut-off the political prisoners’ visits and the families’ hearts grew strained as they had no news of their loved ones. Fear and anxiety very soon broke into their hearts.

Two to three months later, a member of her family received a call and was told to present himself to the prison. He was given a bag of ‘Azam’s personal belongings’ and said they had executed her and told him not to come for her anymore. They gave no other news on how she was executed and were she was buried. Azam’s family still cannot believe she was killed.

Iran: One divorce registered for every four marriages