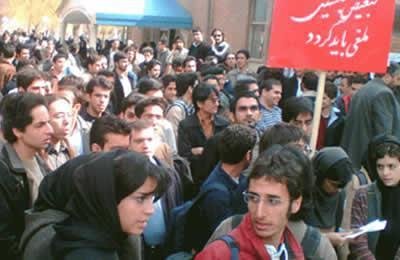 Students should be expecting harsher measures for segregation at schools

“Islam has a great knowledge of the nature of human beings. That is why it has ordered the veil and for women and men not to mix.”

So said the mullahs’ leader Ali Khamenei in a meeting with presidents of universities and research centers and other centers of science and technology in Tehran on Wednesday, November 11, 2015, thus taking a harsh stance on a minimal relaxation of atmosphere in universities.

The clerical regime takes advantage of the name of Islam to justify its misogynous and anti-democratic measures to restrict women’s freedoms and freedom of activities in universities which have always been the hub of anti-government protests in Iran.

In another scheme to justify his backward views aimed at preserving his own and the mullahs’ grips on power, he tied such mixing of sexes to Western values and said, “How much have Westerners benefited from mixing boys and girls, that now, we do the same?… So many sexual crimes are taking place today in the U.S. and Europe, and they do not suffice to the opposite sex. It will get even worse.”

Implying more stress on segregation of the sexes, he said, “What is the meaning of mixed camping? Mixed climbing, mixed camping even abroad! No, this is not the nature of any cultural activity. It has a different meaning. Cultural officials must understand what they are doing.”

Therefore, university students are going to face even more sex-segregation in universities.