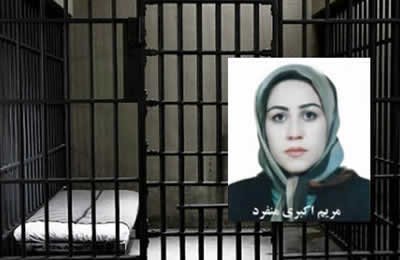 Political Prisoner in Iran Writes to Brother in Camp Liberty

She is a political prisoner, mother of three girls, serving a sentence of 15 years for having relatives in Camp Liberty and participating in anti-regime protests.

She wrote in her letter to her brother, Hamid Reza in Camp Liberty after the October 29, 2015, deadly attack:

There is a week difference in time between here and the outside world and news reports. Each Sunday, a tiny window is open to us to the outside world, and we have to hear all the news and developments inside prison in our 30-minute visits. There were many horrible reports that terrified us and we remained deeply worried until we heard the latest details. This time, maybe we were lucky.

We were receiving reports after two days. From Friday to Sunday. I don’t know what emotions were driving me; I didn’t know what to do; so I picked up a pen to write to you. For you, my dear brother. For you, my dear Hamid Reza, whom at this moment I don’t know if you are still alive? Or how many of your friends lost their lives in your arms and you weren’t able to do anything for them. I wanted to write to you about my emotions the moment I heard the news of the catastrophic attack on Camp Liberty once again from the Iranian regime’s news networks.

I don’t know if you will read this letter or not? Are you still alive?

The moment I heard the news, the first thing that came to my mind was: oh all the mothers!

Oh my God, once again the hearts of our mothers will be broken, and their eyes, full of tears, staring at the TV sets listening to the news.

I am sitting on my bed and over and over again I am thinking about the atmosphere in Liberty, and the 23 martyrs and the large numbers who have been injured. Oh God! Is it Alireza or Masoumeh, Mohammad or Farshid, Assadollah, Alam or Zahra? Oh God, which one? Which one has lost their life and is now in Heaven? Which mother is now in grief and pain? If my sister Sedigheh is one of them, what would I tell Hossein? I don’t see Hossein. How can I send him a message?

More and more questions came to my mind. I recall our last meeting and the words you had for me back then. I remember Hassan’s mother, how she was staring at the TV set hearing the death of her son on the news. Or remembering little Atena, she was so young and she had to go through such harsh times or the mother of Shirin.

The parents of Mahdiyeh and Akbar, and the other mothers who had, prior to this, heard reports about their loved ones perishing. Finally, I told myself if Hamid Reza is now gone, at least mother has passed away and she will not go through all that grief again. There is no word or phrase to describe all this atrocity and cruelty.

I ask myself and all the world, how many more generations and people of this land must pay the price and witness violence and the destruction of humanity? Then all those in pain must start writing, to forever eternalize all this bravery. I want to shout and scream: Is there anyone to help us?

I want to shout and scream: where are you all those appeasers? Enough is enough! Can you not hear all this?

Do you not see this crime against humanity?

Misters Obama and Ban Ki-moon, and Ms. Mogherini, to you who sit at one table and negotiate with the Islamic Republic, Mr. John Kerry! You are asking the Iraqi government to identify and arrest the perpetrators of this crime, while you yourself are negotiating with them? You should know that any deal you make will be paid in the end by the lives of noble human beings whose cries are even heard by the stars, but not by you.

Until when do you intend to only condemn them on paper and issue more resolutions? Know this, you are an accomplice in these crimes. Your hands are drenched in the blood of our loved ones.

My dear Hamid Reza! I don’t know how we are patient, starring at the sky, behind these stone walls. With our worried sisters, and what developments will there be until Sunday and what news will we receive.

I tell myself, God loved Mom so much, taking her so soon, and she is not here to witness these days.

She didn’t see how her children were killed, and others have now remained there defending themselves with their bare hands.

It is us who learn humanity, dignity and morals from you, and the martyrs who went in the utmost perfection of humanity. It is us praying to the Heavens for more of your perseverance, wishing you the utmost patience.

I feel grief inside when I think that on this planet, there is no one to end these crimes.

Oh God, does the world have to perish in such darkness? When I think about the fact that you are the light in this darkness, standing in the face of this dark world, I am engulfed in delight and regret. The delight of your presence is a window to fresh air, and engulfed in regret that it is you against the entire world!

This is the call of God telling us not to look at their small numbers, that we will send angels to your support, and I am certain that thousands upon thousands of angels are accompanying you in this journey.

Thus, I am certain you will be victorious. Here, on behalf of all the freedom-loving men and women whose hearts beat for humanity, and on behalf of myself, a worried sister, I want to condemn this inhumane crime and demand measures to punish the perpetrators behind this crime.