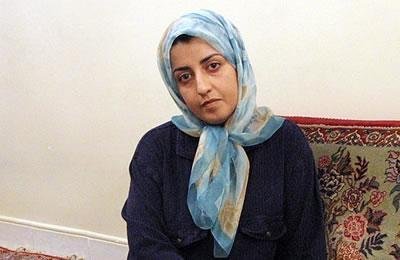 Political prisoner Nargess Mohammadi, Vice-President of the Human Rights League, wrote an open letter to Tehran’s Prosecutor, explaining conditions of her dispatch to the hospital and protested the way she was treated by security forces in this process.

The text of her letter is translated below:

On October 5, I reported for inspection before being sent to hospital. I told the female guard that I would probably have to undergo echography for my heart; so, please don’t come behind the partition when I take off my clothes. She said, “No. We must come.” I asked her to go with me to the colonel so that we could resolve the issue, but the colonel was not in. I explained the situation to his deputy and I said it was not morally and religiously proper to do so. The person in charge of sending me to hospital impudently and in an offending manner said, “You shouldn’t speak of religion. If you were Muslim, your place would have not been in Evin.” He went on with more abusive words and manners. I returned to the ward because I was not feeling well.

The next day, I suffered a sudden attack and a nervous seizure. My beloved cell-mates helped me walk from the second floor down to the ward’s entrance on the first floor because there was no [wheelchair or any] other equipment in the ward. Then they got me on the ambulance. The ambulance’s door could not be completely closed. My head was located near the half-open doors and while I was in a terrible condition, I had to also worry about the likelihood of falling out of the ambulance.

Evin’s dispensary had coordinated my transfer with Imam-Khomeini Hospital as an emergency case. I was lying on the stretcher in the ambulance, when suddenly a female soldier and two male soldiers came with handcuffs and shackles and stood over my head. I put my hands under my arms and said, “I won’t allow you to handcuff me, because I’m really not feeling well and I won’t be able to escape. On the other hand, you are four people inside the ambulance. What do you need the handcuffs for? The female soldier said, “Even if you go into coma, we are supposed to handcuff you” and then she put the handcuffs on me.

I had become really nervous and my convulsions began. Then I had another nervous seizure so they had to stop the ambulance for a few minutes by the side of the road.

A neurologist came to me and explained that because I had that nervous convulsion I had to be monitored until the next morning and that I had to be hospitalized for three days. In light of the history of my disease since 2010 in the solitary cells of the 209th ward of Evin, and considering the difficult conditions including the handcuffs, I asked the doctor to release me at my own consent. So the honorable doctor wrote a letter indicating that the patient needs to be visited by her doctors but she can leave the hospital.

After five days, I was finally hospitalized. Since the moment I was sent to the hospital, my hands were in handcuffs, even when the doctor was examining me. My handcuffs were not removed, even when he was taking my blood pressure. When we entered my hospital room, the soldiers immediately handcuffed me and tied me to the bed such that I could not even sit or sleep comfortably.

Due to nervous pressure, my situation deteriorated further more. My requests and protests went unheeded. From October 11 to October 19 (nine days), I was held without permission to be visited even by my parents. I was not allowed to go out of the room. I was on the bed and I could only use the bathroom. It was forbidden for me to have money and they did not even bring me the fruits I had in the ward in prison, either. I had nothing to eat except for hospital food. The room’s door and curtains were also closed all the time.

Two days after I was hospitalized, I went unconscious in the examination room. So upon doctor’s instructions, two nurses came the next day to give me a bath and wash my hair and prepare me for brain scan. The female soldier immediately called the colonel and asked for instructions. The instruction was that she had to accompany me in the bathroom. In protest to such a decision and such an inhuman treatment I went under the shower with all my clothes on and the female soldier was also present.

On October 18, the colonel came to my room. I asked him to please allow me to be examined alone whenever I had to undress for certain checkups or examinations and the female soldier can make her inspections beforehand and leave, so that I would not have to be examined in front of the soldiers. The colonel accepted.

From October 20 to 12 noon on October 21, I was being prepared for endoscopy and colonoscopy. I should have refrained from eating and I had to use 4 liters of material that would wash away my digestive system. Finally at 1 p.m. I was taken to the operation room. The female soldier also came in with me. I asked her to please stay behind the door of the operation room. She talked to the colonel and said that she would stay in the operation room. So, exactly at the last moment that I was supposed to be anesthetized, I walked out of the operation room and waited until evening may be she would agree to stay out, but she did not.

My doctor talked to the colonel on the phone and said they had to take samples. He explained that this stage is necessary for treatment of the patient and that it must be done in the operation room which is a sterilized environment and only the doctor and the nurses are allowed to be present. He asked the colonel to allow the medical operation go on, but the colonel did not allow the operation even in the presence of military inspectors and for the second time, I was deprived of receiving my treatment.

I would like to hereby declare my strong protest to this illegal, irreligious, and inhumane behavior and I urge Your Excellency to immediately attend to this case.

Indeed, why and based on what kind of rationale, did they put handcuffs on me, tying me to the stretcher inside the ambulance and then to the bed in the emergency room at the hospital and for several hours on October 7, while I was being sent to hospital as an emergency case, such that it caused another nervous seizure for me inside the ambulance? Isn’t it an inhuman treatment and an outright torture to handcuff a patient who suffers from repeated nervous convulsions and is not even able to stand up? Why was I handcuffed during examination by doctor in the hospital’s emergency room on October 11 and the doctor’s requests went unheeded?

Mr. Prosecutor, I do not understand the necessity of the presence of military-security agents in the shower, in the operation room (for colonoscopy) or for the different stages of treatment when the patient has to take off her clothes. Not only I do not understand this and I believe it is contrary to a humane behavior, but the military personnel’s insistence on doing so is nothing but psychological torture for a patient who is not willing to accept it in any way and even accepts to cancel her treatment.

We have heard time and again that in some countries, the military-security personnel undress the prisoners to humiliate them as a method of torture (particularly the prisoners who have certain beliefs or traditions in this regard). This has been discussed in the public opinion and human rights circles.

Now, my question from you as the honorable Prosecutor is how and with which warrant do the military-security forces enter private places like showers, operation rooms (where patients are completely undressed) and examination rooms where patients are ordered to undress? With which warrant do they insist on staying in places where the prisoner does not have any chance of escape and preventing the latter’s treatment? Are these behaviors legal, humane and religious in your opinion?

You are well aware that 6to7-year-old girls are obliged to wear the veil in elementary schools to learn to preserve their chastity. Now my question is, isn’t such a treatment of prisoners against public chastity? Or the function of veil and chastity is merely for subjugation of women in Iranian society?