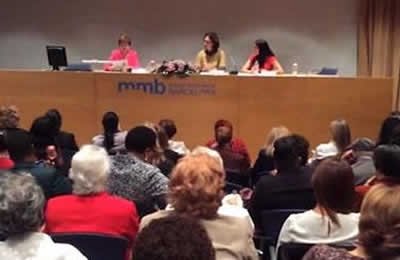 The International Federation of Women in Legal Careers held its 22nd Congress, in Barcelona, Spain, from October 14 to 16 2015. The conferences slogan was “The body of women and fundamental rights”,

in which high-profile jurists from Europe, Latin America and Africa participated.

Upon the invitation of Maria Elena Elverdin, President of the International Federation of Women in Legal Careers, a delegation from the National Council of Resistance of Iran Women’s Committee also participated in this conference.

Ms. Elham Zanjani delivered a speech on the second day of the conference on behalf of the NCRI Women’s Committee. In her remarks she explained the deteriorating human rights and the violations in Iran, increasing executions and systematic the crackdown against women under Rouhani’s tenure.

“Iranian women have not succumbed to the Iranian regime’s demands in the past 37 years despite all the executions, torture, imprisonment, horrific sexual abuses in the regime’s dungeons and acid attacks. Today they will not back down from their rightful demands of reaching freedom, democracy and overthrowing the misogynist mullahs’ regime. They are inspired to rise and stand against the regime from examples set by women in Camp Liberty, Iraq,” she said.

“Mrs. Maryam Rajavi, the leader of our movement, who is standing against the misogynist mullahs’ regime, deeply believes that women are the force of change and by relying on her motto of ‘We can and we must’, we are determined to establish freedom and democracy in our country; of course, in this path we need the support and help of you and all our sisters across the globe,” Ms. Zanjani continued.