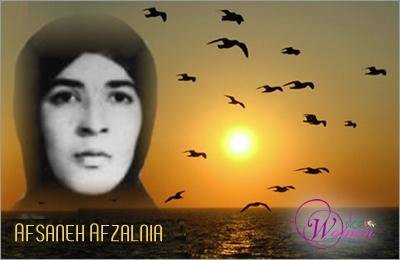 A heroine full of passion and courage

Afsaneh Afzalnia, a student at Tehran University was arrested with her husband, Abbas Pishdadian, and their infant, Fatemeh.

One day, the door to our cell was opened and they brought in Afsaneh after long hours of torture. She was firm and strong. She leaned against the wall due to her intense pain and said, “They are such weasels. They think by starving Fatemeh they can make me confess.”

“They haven’t allowed me to breastfeed Fatemeh for six days now. Today, while I was tied to the torture bed, my interrogator brought in Fatemeh and placed her in front of me. Due to starvation, she didn’t even have the energy to cry. The interrogator was spinning her and playing with her in front of me. She sarcastically said, ‘How ruthless! And you call yourself a Mother? She’s starving and yet you’re not willing to talk. You don’t care about her, do you?’ They shall not gain anything from inflicting pain on mothers and torturing their infants.

In order to bring Afsaneh to words, they would take her to her husband’s half-dead body. “Abbas’ face was covered in blood. I looked at his nails, hands, and feet which were all covered in blood. He was only capable of moving his eyes.   When he saw me, he calmly said, ‘Don’t worry, it’s nothing.’ The interrogator shouted, ‘What is the address of that house in Tajreesh?’ I said I had no idea. He was enraged and yelled in a deep voice, ‘You savage! Take her back to her cell!’

Abbas was executed the following week. Shortly after, Afsaneh and her daughter were executed as well.