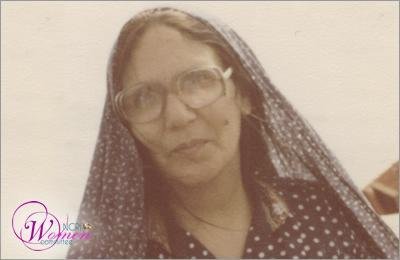 If I had 100 children, I would have encouraged them to do the same

Arasteh Gholivand was toiling woman from Azerbaijan. During the Iranian revolution against the Shah, Mrs. Gholivand took part along with her children in all the demonstrations and popular activities that demanded freedom of Iranian nation.

After the victory of the Iranian people in toppling the Shah, Mrs. Gholivand supported the opposition People’s Mojahedin Organization of Iran (PMOI) and was an outspoken opponent of the backward policies and views of the ruling mullahs who had seized power in her neighborhood and among relatives.

Three of her children, Gholamreza, Reza and Soghra Bozorganfard were executed by the clerical regime early after the beginning of Iranian people’s nationwide resistance against the clerical regime. However, Mrs. Gholivand was firm in her positions and struggle for freedom.

Once, Evin’s warden told her, “Your son is sentenced to 100 years in prison.” She replied, “If I had 100 children, I would have encouraged them to do the same.”

Mrs. Gholivand was finally arrested in a raid on her residence. The notorious Butcher of Evin, Assadollah Lajevardi, savagely tortured her. Despite her old age, she was very strong under torture and did not show the slightest weakness, disappointing the Butcher of Evin who sent this heroine before the firing squads the next day.