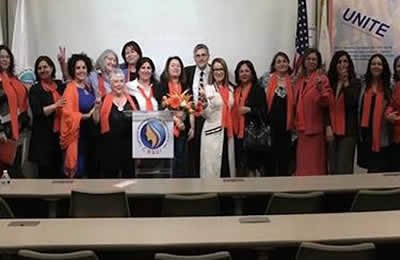 The event, which was held on December 5, 2015, received widespread support from women’s rights activists in the U.S. and included a speech by the Mayor of the City of West Hollywood, Lindsey P. Horvath. Other speakers at the event included Souzan Baaj, Chairwoman of Syrian Institute of Progress; Reverend Marni Martin, Spiritual Director; and Jerilyn Stapleton, President of California NOW.

The event also hosted an exhibition highlighting cases of violations of women’s rights by the mullahs’ regime in Iran.

Speakers condemned the misogynous crimes of the mullahs’ regime. They declared their support for the struggle by Iranian women, in particular the 1000 vanguard women of the opposition People’s Mojahedin (PMOI or MEK), to obtain freedom and equality in Iran.

Speakers pointed out that under the mullahs’ regime in Iran women are denied basic rights, including the right to freely choose their type of clothing, work and travel or to seek positions of high office including the post of President or judges.

Mayor Horvath told the event that she had been moved after reading the book “Women Against Fundamentalism” by Iranian opposition leader Mrs. Maryam Rajavi, and that she had travelled to Paris over the summer where she had met with the President-elect of the National Council of Resistance of Iran (NCRI). She noted that the women of Camp Liberty are exemplary because with their endurance and steadfastness they have shown how much one can pay the price for achieving her cause. She urged international protection for the women of the Iranian Resistance in Camp Liberty, Iraq.

Ms. Baaj also declared that her presence at the conference is not to condemn injustices but to bring justice to the women of Iran, Syria, and Iraq by getting rid of the dictatorships in Iran and Syria.